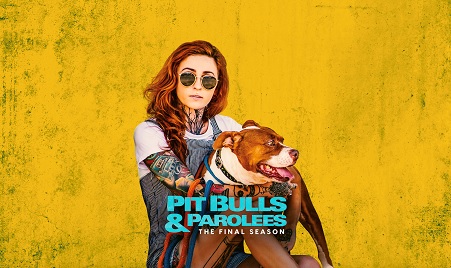 Pit Bull & Parolees is ending its time on Animal Planet, and the 19th and final season will premiere next Saturday night. The series debuted 13 years ago this month, and 194 episodes and 51 specials have aired thus far. The final season will find Tia Maria Torres and her team at Villalobos Rescue Center facing Hurricane Ida and trying to keep the dogs and crew safe.

Animal Planet revealed more about the final season of Pit Bulls & Parolees in a press release.

For over 30 years, Tia and her family have gone above and beyond to give a second chance at life to pit bulls at Villalobos Rescue Center, the largest Pit Bull rescue center in the U.S. while also offering parolees a new start as staff and volunteers. Now, in the final season of “Pit Bulls & Parolees,” dedicated audiences will witness higher stakes as Tia and the Villalobos crew strive to give every dog an opportunity to find their forever home and a second chance at life. And while this may be the end of one chapter, the story of redemption and rescue continues for Tia and her Villalobos family in their never-ending battle to save man and man’s best friend. The final season of “Pit Bulls & Parolees” premieres on Animal Planet Saturday, Oct. 22 at 9PM ET/ PT.

In the season’s premiere, the Villalobos Rescue Center is tested as Hurricane Ida bears down on Louisiana, leaving Tia and the rest of the crew race to move the rescue dogs to safety amid the intense storm. We’ll also see Mariah take the reins for her first solo wolf-dog rescue named Dorothy from the streets of Louisiana, while Lizzy and Earl help a music-loving couple from Kentucky find their dream dog. Additionally, the premiere episode of “Pit Bulls & Parolees” is a part of Animal Planet’s annual “You Watch, We Give” tradition where for every viewer that tunes in to watch the season premiere on October 22, 2022 at 9PM ET/PT, Animal Plant will donate $1.00 to Villalobos Rescue Center up to the amount of $20,000, which will go toward food and shelter needs for rescued pit bulls.

Later this season, audiences will witness incredible rescue stories from far and wide. We’ll see Tia and daughter-in-law Lizzy answer a distress call from a shelter in Mississippi and take on eight hound dogs in desperate condition; the Villalobos team prep to welcome the public for a volunteer day as the new Villalobos Rescue Center location nears completion; daughter Mariah and her older brother Moe put their motorcycle passion to work by building a motorcycle sidecar in honor of her recently deceased dog, Tater, in order to give rides to older dogs at the rescue; and Apple, a senior dog who finally finds their forever home. Audiences will also witness Tia hire her first female parolee in Villalobos History to the team to see if she’ll be the right fit as a dog trainer and dog handler.

In addition to watching the show on Animal Planet, viewers can keep up with the latest news on social media by using the hashtag #PitBullsandParolees and follow Animal Planet on Facebook, Twitter, Instagram, and TikTok.

What do you think? Are you sad to see Pit Bulls & Parolees end?

I am very sad that this show is ending! I wish that there was something that could be done to keep it going. I am a dog lover and have rescued many myself and enjoy watching Tia and her family as well as the parolees rescue all of these dogs. Please reconsider? Thank you!

Yes I like the show and will miss it greatly. Now I have to find another show to watch on Saturdays. Most likely on someone else’s channels.

I’m so sad I feel like I’m losing family , a piece of my heart and soul. I hope someday you come back. But I recognize you may be tired.

I am absolutely floored by this.
Tia, Where ever you go I will follow.

I am so upset, you won’t be on TV. Maybe another channel will pick you up. It brought me to tears.

I hope you listen to all the comments on here and adjust your schedule to include more seasons of PB&P. We adopted an AmStaff from a high-kill shelter in CA before it could be euthanized. He’s the best dog, so sweet. We only got him after being relieved of our fears about the breed by watching this show. Our thanks go to Animal Planet and the whole staff of Villalobos Rescue for helping us make the choice to adopt a dog we had never met through a different outfit than Villalobos (which had moved to Louisiana). But they were not… Read more »

Please don’t cancel this show! We have been watching this show since they were located in CA. It is a “feel good” show without guns, murder, etc. We couldn’t wait for every new season to start. We don’t want to say good-bye to PIT BULLS & PAROLEES! PLEASE KEEP THIS SHOW!

Yes. I am very disappointed that animal planet will not continue with this show. I am waiting to see if it can still go forward without this network.
Great show all this time. Should not be ending.

Yes! I am so upset that Discovery has decided not to continue new seasons of this show, along with others, like Dr Jeff, that highlight humans going above and beyond to help animals and people. In a world that is getting consistently uglier, these shows give us hope for the future and uplift our hearts and our spirits! And what’s even more sad is what Discovery is offering instead… Homestead Rescue, Insane Pools….who cares! And now new animal advocacy and enrichment shows can only be watched with a subscription to Discovery. What a racket! So sad to see Animal Planet’s… Read more »

I watch two shows now on animal planet and this is the top. I have not been able to watch but tonight I made sure I was watching.I noticed End of an Era at the bottom and I’m really sad as this show is my go to for A Saturday Night. I hate to say this is a mistake but it is.
Well Good Luck to Tia and the fam, the staff, volunteers and dogs. I hope they are picked up by another station or service.

I’m so sad to see it end! I’ve watched since the beginning and really hate to see it end. You become vested in the pups & wolves as well as the people.

I really think ending Pit Bulls & Parolees to us one huge mistake!!

I’m very heartbroken this will be the final season of Pitbull & Parolees. As a dog lover, I fell in love with this series and the whole Villalobos family, cast and dogs!! What is the reason the series is ending or being cancelled?

It is probably the best animal show on TV, what is animal planet thinking? When you think of Animal planet you think of watching great stories told of animals being rescued, cared for and finding the storybook ending and this show produces that. Please bring it back. Also would help support them and show the great work they do.