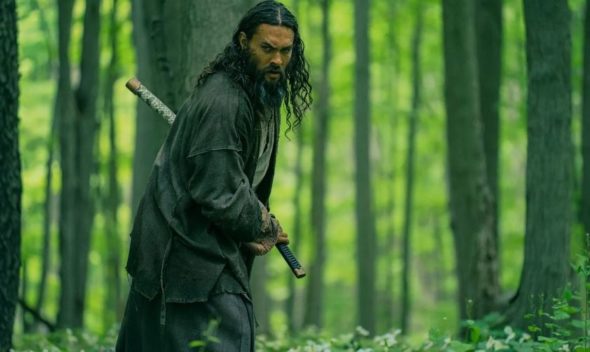 Baba Voss returns to protect his tribe once more in the third season of the See TV show on Apple TV+. As we all know, the Nielsen ratings typically play a big role in determining whether a TV show like See is cancelled or renewed for season four (in this case, we know season three is the end). Apple TV+ and other streaming platforms, however, collect their own data. If you’ve been watching this TV series, we’d love to know how you feel about the third season episodes of See here.

An Apple TV+ post-apocalyptic drama series, the See TV show stars Jason Momoa, Sylvia Hoeks, Hera Hilmar, Christian Camargo, Archie Madekwe, Nesta Cooper, Tom Mison, Olivia Cheng, Eden Epstein, Michael Raymond-James, David Hewlett and Trieste Kelly Dunn. Created by Steven Knight, the series takes place in the distant future, after a deadly virus has decimated humankind. The survivors of this tragedy have been left without their sight and must find new ways to interact, feed themselves, build shelters, and survive. Centuries later, Baba Voss (Momoa) is the Chief of the Alkenny tribe and his wife gives birth to a set of twins who, miraculously, are able to see. The queen of another tribe wants to capture Voss’ children so he must rely on his instincts and warrior skills to protect them. In season three, almost a year has passed since Baba Voss defeated his nemesis brother Edo and bid farewell to his family to live remotely in the forest. But when a Trivantian scientist develops a new and devastating form of sighted weaponry that threatens the future of humanity, Baba returns to Paya in order to protect his tribe once more.

What do you think? Which season three episodes of the See TV series do you rate as wonderful, terrible, or somewhere between? Do you wish that See on Apple TV+ had been renewed for a fourth season, or is three years enough?