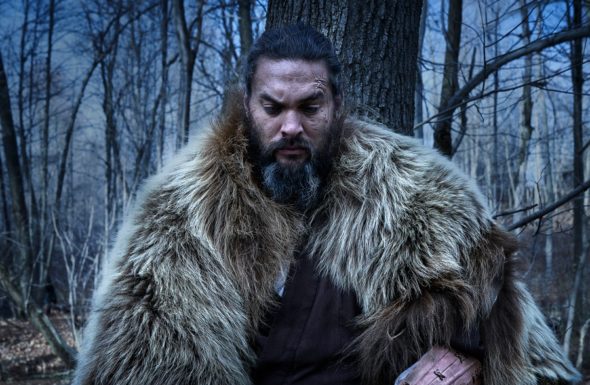 The end is near for Baba Voss. Apple TV+ has announced that the See TV series will end with the upcoming third season. The final eight episodes will kick off on Friday, August 26th.

A post-apocalyptic drama series, the See TV show stars Jason Momoa, Dave Bautista, Alfre Woodard, Eden Epstein, Tom Mison, Hoon Lee, Olivia Cheng, David Hewlett, and Tamara Tunie. Created by Steven Knight, the series takes place in the distant future, after a deadly virus has decimated humankind. The survivors of this tragedy have been left without their sight and must find new ways to interact, feed themselves, build shelters, and survive. Centuries later, Baba Voss (Momoa) is the Chief of the Alkenny tribe and his wife gives birth to a set of twins who, miraculously, are able to see. The queen of another tribe wants to capture Voss’ children so he must rely on his instincts and warrior skills to protect them.

Here’s more information about the upcoming third season of See from Apple TV+:

Apple TV+ today unveiled a first-look at the third season of the epic, post-apocalyptic global hit series “See,” which will make its global debut on Friday, August 26, 2022. Starring Jason Momoa, the eight-episode third season will mark the last chapter of the series and will premiere with the first episode, followed by one new episode weekly, every Friday.

“We are thrilled to share this epic final chapter of ‘See,’ which delivers all the intense drama, riveting action, and heartfelt emotion fans have come to expect, as well as what we think is a deeply satisfying conclusion to our story,” said “See” showrunner and executive producer Jonathan Tropper. “Building a world without sight was a particularly unique and continuous challenge that was met through the passionate and thoughtful collaboration of a phenomenally talented and diverse team both in front of and behind the camera. The show has been a monumental labor of love for all involved, and we are eternally grateful for the way ‘See’ has been embraced by viewers around the world.”

“See” is set in a brutal and primitive future, hundreds of years after humankind has lost the ability to see. In season three, almost a year has passed since Baba Voss (Momoa) defeated his nemesis brother Edo and bid farewell to his family to live remotely in the forest. But when a Trivantian scientist develops a new and devastating form of sighted weaponry that threatens the future of humanity, Baba returns to Paya in order to protect his tribe once more.

The series features cast and crew who are blind or have low vision and has been honored for its representation of the visually impaired, winning the Ruderman Family Foundation Seal of Authentic Representation in 2020. “See” was also recognized this year with an NAACP Image Awards nomination for star Alfre Woodard in the Outstanding Supporting Actress in a Drama Series category.

The first two seasons of “See” are now available to stream on Apple TV+.

About Apple TV+
Apple TV+ is available on the Apple TV app in over 100 countries and regions, on over 1 billion screens, including iPhone, iPad, Apple TV, Mac, popular smart TVs from Samsung, LG, Sony, VIZIO, TCL and others, Roku and Amazon Fire TV devices, Chromecast with Google TV, PlayStation and Xbox gaming consoles, and at tv.apple.com, for $4.99 per month with a seven-day free trial. For a limited time, customers who purchase a new iPhone, iPad, Apple TV, Mac or iPod touch can enjoy one year of Apple TV+ for free. This special offer is good for three months after the first activation of the eligible device.

What do you think? Have you kept up with the See TV series on Apple TV+? Are you disappointed that there won’t be a fourth season or, is three seasons enough?

Sorry to see it end. The actors are amazing. There are a lot of elements that make you angry, but that’s what keeps you interested. As for the sounds from the queen, I’m sure many have seen/heard worse. It’s a shame that these series are made and then end once you’ve been hooked.

I live in Hell, so I’m used to sights & sounds used to torment mortals for various reasons. But there are few sounds more horrible than whatever the sick noises are that come out of the so called “queen” on this show.

Who made her queen anyway? People follow that psychopath?? These folks are blind, but with her as their “leader” they probably wish they were deaf as well.

Through out the years I have watched many shows…I don’t see the use of starting a show that is actually good and stopping it. It happens a lot for me personally. I will watch anything in GOT style but i guess my opinion don’t matter much. Stop producing shows if your not keep them playing.

should have canceled it mid first season. waste of actor’s talent

To be honest, I’m not surprised. Hopefully, we’ll see some of the actors in another show.