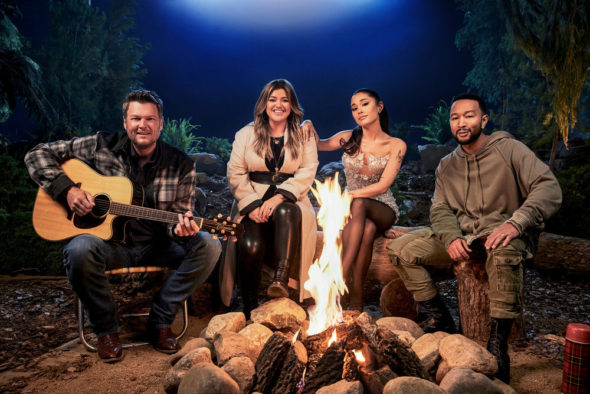 Will Ariana Grande’s team make a big splash in her first year as a coach? Has The Voice TV show been cancelled or renewed for a 22nd season on NBC? The television vulture is watching all the latest cancellation and renewal news, so this page is the place to track the status of The Voice, season 22. Bookmark it, or subscribe for the latest updates. Remember, the television vulture is watching your shows. Are you?

Airing on the NBC television network, The Voice TV show is a singing competition series that’s hosted by Carson Daly and airs twice weekly — typically on Monday and Tuesday nights. Kelly Clarkson, John Legend, and Blake Shelton return to coach in season 21 and are joined by Ariana Grande, a former guest performer. This season’s battle advisors are Jason Aldean (Team Kelly), Camila Cabello (Team Legend), Dierks Bentley (Team Blake), and Kristin Chenoweth (Team Ariana). Ed Sheeran serves as a “mega mentor”. The competition is divided into four stages: blind auditions, battle rounds, knockouts, and live performances. By the end of the blind auditions, 48 performers will have been chosen by the four coaches (12 for each team). They advance to the battles, knockouts, and live performances. In the end, only one will receive the $100,000 prize and a record deal with Universal Music Group.

The Monday episodes of the 21st season of The Voice averaged a 0.83 rating in the 18-49 demographic and 6.77 million viewers. Compared to the Monday episodes of season 19 (which aired Fall 2020), that’s down by 14% in the demo and down by 8% in viewership in the live+same day ratings (including DVR playback through 3:00 AM).

The Tuesday episodes of the 21st season of The Voice averaged a 0.81 rating in the 18-49 demographic and 6.88 million viewers. Compared to the Tuesday episodes of season 19 (which aired Fall 2020), that’s down by 17% in the demo and down by 6% in viewership in the live+same day ratings (including DVR playback through 3:00 AM).

While these numbers don’t include further delayed or streaming viewing, they are a very good indicator of how a show is performing, especially when compared to others on the same channel. There can be other economic factors involved in a show’s fate, but typically the higher-rated series are renewed and the lower-rated ones are cancelled. Find out how The Voice stacks up against other NBC TV shows.

Will NBC cancel or renew The Voice for season 22? The ratings have dropped quite a bit over the years but this series remains the peacock network’s highest-rated unscripted series. During the 2021-22 television season, NBC will air just one cycle instead of the usual two (Fall and Spring), wanting to make it more of an annual event. I have no doubt that The Voice will be renewed and it will be interesting to see if this scheduling move will positively affect the ratings in the 2022-23 season. I’ll update this page with breaking developments. Subscribe for free alerts on The Voice cancellation or renewal news.

What do you think? Are you glad that The Voice TV show has been renewed for a 22nd season? How would you feel if NBC cancelled this TV series, instead?

The vice hasn’t been the same since Adam Levine left ,, the spark isn’t there anymore . I’m sure I’m not the only one to think this , the only judge that is keeping the show afloat is Blake , the others aren’t that interesting in my opinion,,, the chemistry between the judges isn’t there, so it’s boring

I love the voice. The voice was the 1st to start these singing shows. It’s the best.pleade don’t cancel

Definitely want to see the Voice back in 2022. Love the show.

Wasn’t sure if I was going to enjoy this season of The Voice with Ariana Grande, but ended up LOVING it!! Not a fan of her music, but hope she’s as genuine off screen as she came across on TV. She seems like a caring,, genuine soul.. Also love Nick Jonas as a coach!! Wouldn’t mind if he returned also.

I really hope The Voice is renewed for Season 22. I only wish it was on a different network. Dish dropped the greedy NBC and I had to watch delayed streaming of Season 21 on a laptop. Sucks!

I believe The Voice Ought to come back on With Coaches Adam Levine, Blake Shelton, Kelly Clarkson and John Legend…..I Don’t want Blake to Leave The Voice…hopefully he has other tv show or program or live concerts to play at.

I believe the ratings would be higher with the return of Gwen Stefani. Besides, I like looking at her more!! I hope, either way, Grande doesn’t come back.

NBC should rename the show “The Voices”. Next year I expect a quartet. The winners deserved the win but enough with duo’s and trio’s. One voice. One winner. If not, then change the name of the show.

I think Paris or Windy we’re the true winners not a boy name Tom.

If a.grande returns, i will not watch, again, if gwen stephani returns, the ratings will go back up, and i will watch.

Agree with you. Ariana is a cry baby and so immature. Would like to see Gwen back, she is so real and lovable.

I agree with you. Where is Jennifer Hudson?