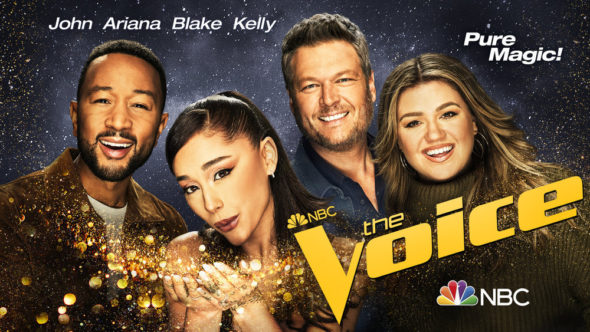 For the first time since 2012, NBC is airing just one cycle of The Voice this season. Will this scheduling move or the addition of Ariana Grande give this series a boost in the ratings? Could The Voice be cancelled or is it essentially guaranteed to be renewed for season 22 and 2022-23? Stay tuned. Status Update Below.

A singing competition series, The Voice TV show is hosted by Carson Daly and airs twice weekly — typically on Monday and Tuesday nights. Kelly Clarkson, John Legend, and Blake Shelton return to coach in season 21 and are joined by Ariana Grande, a former guest performer. This season’s battle advisors are Jason Aldean (Team Kelly), Camila Cabello (Team Legend), Dierks Bentley (Team Blake), and Kristin Chenoweth (Team Ariana). Ed Sheeran serves as a “mega mentor”.  The competition is divided into four stages: blind auditions, battle rounds, knockouts, and live performances. By the end of the blind auditions, 48 performers will have been chosen by the four coaches (12 for each team). They advance to the battles, knockouts, and live performances. In the end, only one will receive the $100,000 prize and a record deal with Universal Music Group.

12/14 update: You can see the latest night’s ratings in context.

What do you think? Do you like The Voice TV series on NBC? Should it be cancelled or renewed for a 22nd season?

I guess The Voice needs to change it’s name to The Voice’s – I believe if want Duets or Trio’s or Quartet’s than offer up a show for those – The Voice should only be for one person to show their talent, I agree this year was very talented across the board. I definitely don’t believe it’s fare for a Trio to win in this setting. Need to really put some thought into this for the future.

A armento
Reply to  R Lewis

No they shouldn’t because trios very rarely make it past the first 3 rounds and even when they do they don’t make it to the Finale ever!!!!!!!!!!!for the most part.
This season was an exception but just because one trio wins doesn’t mean they change the name so get over it and just be happy we even got a season 21 ugh.

Last edited 5 months ago by A armento
0
0
Reply

Very disappointed with this season. The winners aren’t winning because of their talents. It’s so obvious what’s going on and if it doesn’t change we won’t be watching it anymore!

A armento
Reply to  C Johnson

I am also disappointed, very much so. This was the most heart breaking season to watch a group of people make it thru each week and had no talent at all. This was supposed to had been a show about who had the best voice, not who had the most fans or who’s team you’re on. VERY ,VERY DISAPPOINTED!!!!!!!

Please be sure to air the voice

Won’t be watching this year. Not happy with John and his wife. Will tune back in if he’s replaced.

If Blake and Kelly don’t quit the bickering, I think the show should be cancelled. We’re watching the show for the talent of the contestants – not to here them bicker. We get enough of that in real life.

The bickering, if taken the way it is intended, should not bother you but should entertain you. They are best friends and are just joking around with each other. Calm down