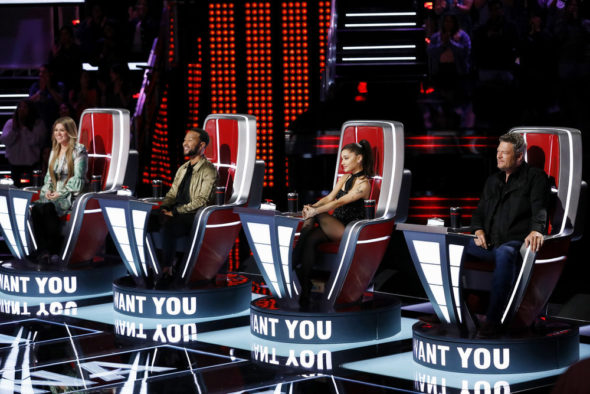 Which coach’s team will win in the 21st season of The Voice TV show on NBC? As we all know, the Nielsen ratings typically play a big role in determining whether a TV show like The Voice is cancelled or renewed for season 22. Unfortunately, most of us do not live in Nielsen households. Because many viewers feel frustrated when their viewing habits and opinions aren’t considered, we invite you to rate all of the 21st season episodes of The Voice here. Status Update Below.

An NBC singing competition, The Voice TV show is a singing competition series that’s hosted by Carson Daly and airs twice weekly — typically on Monday and Tuesday nights. Kelly Clarkson, John Legend, and Blake Shelton return to coach in season 21 and are joined by Ariana Grande, a former guest performer. This season’s battle advisors are Jason Aldean (Team Kelly), Camila Cabello (Team Legend), Dierks Bentley (Team Blake), and Kristin Chenoweth (Team Ariana). Ed Sheeran serves as a “mega mentor”. The competition is divided into four stages: blind auditions, battle rounds, knockouts, and live performances. By the end of the blind auditions, 48 performers will have been chosen by the four coaches (12 for each team). They advance to the battles, knockouts, and live performances. In the end, only one will receive the $100,000 prize and a record deal with Universal Music Group.

What do you think? Which season 21 episodes of The Voice TV series do you rate as wonderful, terrible, or somewhere between? Do you think that The Voice should be cancelled or renewed for a 22nd season on NBC? Don’t forget to vote, and share your thoughts, below.

Sylist is so bad. She has the contestant look like clowns.

Worst season in recent memory.
Running out of stream, plus too much contemporary pop and not enough non-pop.

Blake made a mistake in not keeping hailey green. She has a one of a kind voice. She should be in the show. Makes me think the voice is rigged. I won’t watch the voice again. I think the show should be canceled.

I do not think duos and bands should compete against soloists. It just doesn’t make sense! I love the show but hate that you are not keeping the competition to ONLY soloists.

The voice has NOT PROVIDED a breakout star from this celebrity ego lovefest that only serves them not the new talent. Sorry. Songland actually gives the new talent a project when they win. The Voice does absolutely nothing. Why is it even on air anymore?

Thought Grande was quite aggressive and arrogant. Blake and Kelly should significantly pare back bickering. More interested in contestants vocal performances than judges lives!

Grande is flyweight, all looks, no substance.