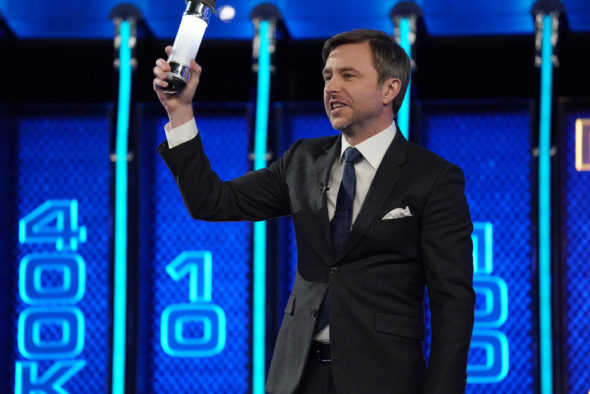 Chris Hardwick is getting ready to play more games and give away cash. NBC has renewed The Wall TV show for a fifth year and the 2022-23 season. The fourth year’s episodes aired between January 2021 and February of this year.

A game show, The Wall TV series is hosted by Hardwick. The game follows pairs of players as they pursue a cash prize of up to $12 million. When a team answers a trivia question correctly, a green ball drops from the top of the grid-like wall and bounces randomly toward the bottom of the four-stories high structure. At the bottom of the wall, the ball will land in one of many slots, each with a value of $1 to $1 million. That value is added to the team’s total winnings. If the team misses a question, a red ball descends toward a random slot. The resulting amount is then deducted from the team’s total. In this game, players need both the answers and lucky bounces, to win a big cash prize.

Airing on Monday nights, the fourth season of The Wall averaged a 0.44 rating in the 18-49 demographic and 2.58 million viewers. Compared to season three, that’s down by 16% in the demo and down by 19% in viewership.

Season five of The Wall is expected to premiere midseason, in early 2023.

What do you think? Do you enjoy The Wall TV series? Are you looking forward to watching season five on NBC?

My favorite game show ever- I strategize with my nephew how we would play it. I love ChrisH. He is a fantastic host. I wish this show had the regularity of who wants to be a millionaire