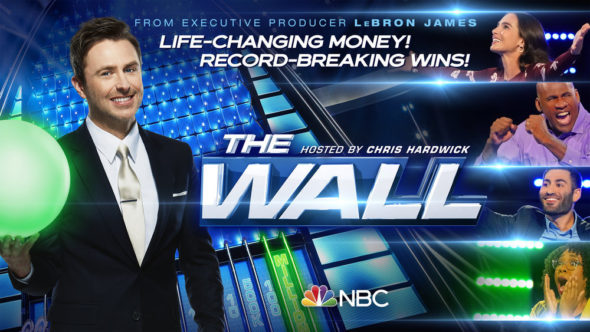 In its first two seasons, The Wall has been a moderate success for NBC. However, it’s been off the air for two years. Will this be a case of “absence making the heart grow fonder” and translate into big ratings for NBC or, will viewers have forgotten show even existed? Will The Wall be cancelled or renewed for season four? Stay tuned. *Status Update Below.

Note: Because NBC has broken season three up between the 2019-20 and 2020-21 broadcast seasons, the ratings are presented here in two different charts. The averages are included on the respective season charts (2019-20 and 2020-21).

What do you think? Do you like The Wall TV series on NBC? Should it be cancelled or renewed for a fourth season?

I really enjoyed THE WALL. Please return the show as soon as possible. Thanks!

This show was fun when it first started, but I quickly realized it was rigged. It would also be nice if the contestants that they picked actually needed money.

It is illegal to rig a gameshow in the USA. Did you know Apple had to make the “shuffle” button less random, because users would complain it wasn’t shuffling randomly enough? Statistics are odd like that.

Keep the show we love love watching it!

A fun show, I guarantee you will not fall asleep watching it.

I’ve enjoyed the Wall tv show. My friends and family also like it. Please leave it on for another year so people have an opportunity to view it. It’s really good.

There is no question it should be renewed and included in the normal fall schedule. The issue is that NBC has yet to do any promotion of the show. Why?

The Wall is the most wicked game ever…..NBC get off your asses and promote this show