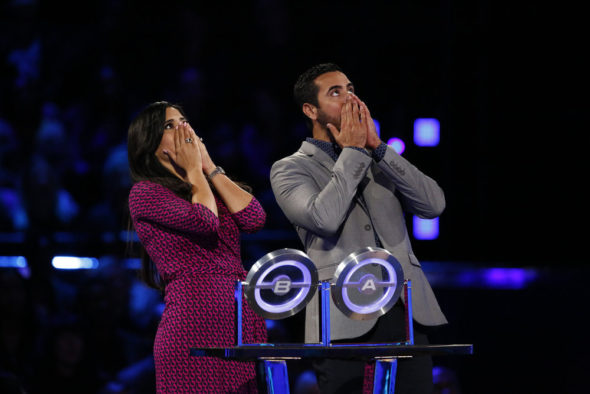 How well does the second season of The Wall TV show on NBC play out for home viewers? As we all know, the Nielsen ratings typically play a big role in determining whether a TV show like The Wall is cancelled or renewed for season three. Unfortunately, most of us do not live in Nielsen households. Because many viewers feel frustration when their viewing habits and opinions aren’t considered, we’d like to offer you the chance to rate all of The Wall season two episodes here.

An NBC game show hosted by Chris Hardwick, The Wall follows pairs of players as they pursue a cash prize of up to $12 million. When a team answers a trivia question correctly, a green ball drops from the top of the grid-like wall and bounces randomly toward the bottom of the four-stories high structure. At the bottom of the wall, the ball will land in one of many slots, each with a value of $1 to $1 million. That value is added to the team’s total winnings. If the team misses a question, a red ball descends toward a random slot. The resulting amount will be deducted from the team’s total. In this game, players need both the answers, and lucky bounces, to win a big cash prize. Executive producer LeBron James is expected to appear in season two.

What do you think? Which season two episodes of The Wall TV series do you rate as wonderful, terrible, or somewhere between? Should NBC cancel or renew The Wall for a third season? Don’t forget to vote, and share your thoughts, below.

PLEASE, DON’T TAKE IT OFF. I’M SO EXCITED, I’LL STOP ANYTHING, THAT I’M DOING TO SEE THE WALL! AND I EVEN SAID THAT THAT IT WOULD BE GREAT IF, IT THEY PUT IT ON FOR 1 HOUR! AND 2-3 TIMES A WEEK,!!! IT WOULD MAKE MY DAYS! PLEASE, I’M ASKING FOR CONTINUING 2021 AND MORE!!! THANK YOU FOR YOUR TIME AND PATIENCE. CAN’T WAIT TO SEE OUTCOME OF THE DECISION! THANK YOU, AGAIN!!!

Love The Wall! Watched the first time because nothing else was on. Now I won’t miss it! Always keeps me on the edge of my seat!

The Wall is the best… an most exhilarating game show that has me on my feet screaming every time I watch .. this is a Adrenalin heart pumping fun fun fun experience every time .. please keep this on for not only two seasons but 10 yrs couldn’t be enough for us in our household …Nelsons

I enjoy watching “The Wall”. I wish it was on Monday to Friday. Please renew this game show for many seasons/years in the future. Thank-you.

I Love The Wall, and enjoy watching it.

Please put the wall back on . Thank you !