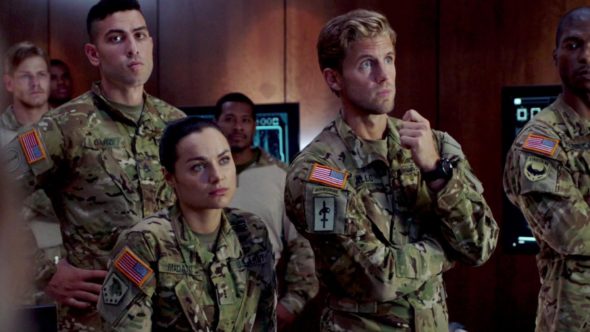 It’s been said that “war is hell” and certainly, network television is no piece of cake either. Last week marked the finale of the Valor TV show on The CW and it is highly unlikely to be renewed for a second season. Would you watch season two of Valor if it survived somehow?

A military drama that aired on The CW television network, Valor stars Christina Ochoa, Matt Barr, Charlie Barnett, Corbin Reid, W. Trè Davis, Nigel Thatch, and Melissa Roxburgh. The story centers on the Shadow Raiders, a crack unit of U.S. Army helicopter pilots. After Jimmy Kam (Davis) disappears during a top-secret mission to Somalia, the only safe returnees — Captain Leland Gallo (Barr) and Warrant Officer Nora Madani (Ochoa) — know what really happened there. As they train to rescue Jimmy, Nora and Leland find themselves growing closer. Their desires end up at odds with their commitment to honor and duty. Jimmy’s wife and Nora’s boyfriend can’t help but be suspicious. Meanwhile, the mysterious Thea (Roxburgh), is assigned to investigate the unit’s failed mission.

While the TV series has not been officially cancelled, it is not expected to be renewed.

While he didn’t come out and say that Valor had been cancelled, The CW boss Mark Pedowtiz recently talked about why the series didn’t work for the network. He said, “It did not resonate the way we’d hoped it would resonate. I wanted to do one for 6-7 years; it maybe is a question whether the CW audience would come to a military drama for us. It did not help that there were 85 of them this year, I don’t think any of them did really well. I’m proud of what (creator Kyle Jarrow and producer Bill Haber) did, I will be in business with them again.”

What do you think? Did you like the Valor TV show on The CW? Do you think it should be cancelled? Would you have watched season two?

Enjoyed Valor. Stumbled on it surfing netflix only to find that there would be no second series. Another series leaving watchers hanging. Disappointed

Yes we would definitely watch Valor.loved it and was looking forward to a second season.
Very disappointed!!!

Excellent series. Wish it had continued.

I would watch again and again. CW didn’t do a very good job of promoting the show either. I just happened to be scrolling thru channels one day and came across it and was hooked.

Yes I would watch more