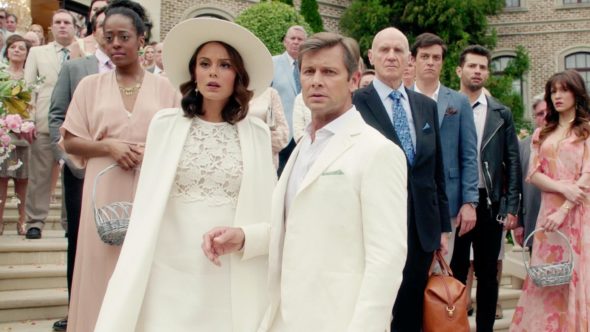 When one show rises, another falls. Deadline reports The CW has given a full season order to freshman series Dynasty but not to Valor.

The CW has ordered nine additional episodes for the first season of Dynasty, bringing their total to 22 episodes. However, the same does not go for the low-rated military drama Valor.

Even though The CW has not officially cancelled the freshman series, the lack of a full season order is not good news. The show’s low average rating of .24 in the 18-49 demo and poor viewership turnout at 1.027 million indicates Valor might be headed for cancellation.

However, as The CW did for No Tomorrow and Frequency, the network will wait to see how Valor performs on Netflix before they make a decision in the spring.

What do you think? Are you watching Dynasty and/or Valor? Do you think Valor should be renewed?

Dynasty: It is a fast moving, awesome, entertaining, and many plot changes of which the acting excels; unfortunately the viewership is far from what I realize it should be. It dazzles me and I hope it continues and it increases to high ratings.

I’m liking the New Dynasty!! It’s FUN , CRAZY , BOLD, FUNNY, and just what Dynasty was in the original! Campy!!!

Dynasty remake is horrible, worse show on TV in my opinion. Cancellation is in order.

Loved the original and love the reboot! Keep Dynasty going!!!

For me it would be ashame for Valor not to be given more of a chance, the storyline so far is reasonably plausible (admittedly being a former SAS veteran I can see the shortcuts that they have taken).
What I don’t like about shows like Dynasty is that they add nothing new to TV, they are simply rehashing an old format whereas at least Valor is showcasing an almost unknown branch of the military.

valor is the best military drama ever! I have always hated shows like that. I am watching Seals and valour and valor is much better!

I really enjoy Valor, I hope it isn’t cancelled!