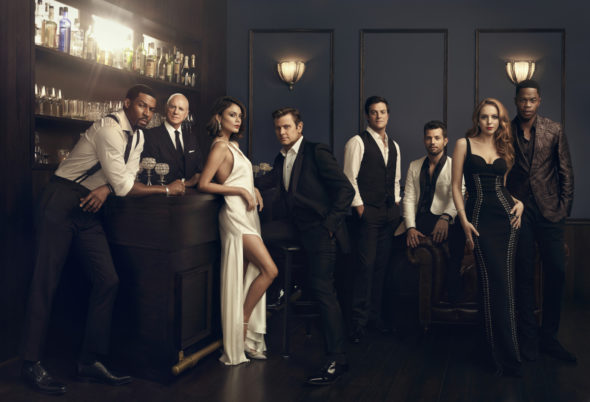 TV show description:
A primetime soap opera, the Dynasty TV show is a reboot of the 1980s drama of the same name. The series centers on the wealthy Carrington family and the powerful empire they must defend against adversaries new and old. Not only are they at odds with a rival family, the Colbys, but also with one another.

Charming and clever, Fallon Carrington (Gillies) considers herself the heir apparent to her father Blake Carrington’s (Show) worldwide energy empire – Carrington Atlantic. All that changes, when Blake calls her, and her brother Steven (Mackay), home. Fallon assumes her father is officially ready to pass the torch, but she could not be more wrong.

Upon arriving at the family’s Atlanta compound, Fallon learns they’re there to meet Blake’s bride-to-be, Cristal (Kelley). Young and beautiful though she may be, Cristal is far from some gold-digger Fallon can drive away.

As Carrington Atlantic’s publicity ace, Cristal is admittedly ambitious, but she’s also talented, ethical, and truly in love with Blake. Still, she finds his family’s opulent lifestyle uncomfortably over-the-top. On top of being at odds with Fallon, she also finds herself in conflict with Joseph Anders (Dale), Blake’s butler, as well as other household staff members.

Damned if she’ll accept this outsider as family, Fallon enlists the help of Michael Culhane (Riley), her secret lover and the family’s driver, to reveal Cristal as a fraud on a treasure hunt. After her plans go up in flames and Blake chooses his new love over her, Fallon cozies up to Daddy’s rival, Jeff Colby (Adegoke), much to Culhane’s chagrin. To Fallon, however, nothing is sweeter than revenge that’s equal parts business and pleasure.

Whether it is more viscous than oil remains to be seen, yet despite their disputes, to the Carringtons blood is still thicker than water. The same holds true for Cristal, when her nephew Sammy Jo (de la Fuente) shows up with baggage from his aunt’s past. Will Cristal’s secrets be exposed to the light of day and fracture her future?

Series Finale:
Episode #108 — Catch 22
A new majordomo begins working at the Manor and piques the interest of the Carringtons. Blake and Cristal (Alonso) disagree on how to handle recent events at PPA, causing more strain between the two. The unlikely duo of Blake and Alexis (Hendrix) go on a search and rescue mission. Fallon  and Liam (Huber) run through a practice labor and delivery. Jeff (Adegoke) is put in a precarious position, one that could potentially change his future radically. Fallon is challenged by the FSN board and Dominique (Michele) offers to help. Sam does not accept Culhane’s (Riley) business choices and tries to sabotage Culhane’s plan. Amanda (Bennett) is presented an amazing opportunity which leaves Kirby (Brown) questioning the future. Adam (Underwood) can’t seem to scheme his way out of his new mess.
First aired: September 16, 2022.

What do you think? Do you like the Dynasty TV series? Should this CW TV show have been cancelled or renewed for a sixth season?

Love it, hate to see it go. Watched the first Dynasty and this is a great, evil show.

I love Dynasty!! I enjoy the show. I think all the actors and actresses do a fantastic job. The storylines always keep you on the edge of your seat.

Dynasty is the beat show out there!