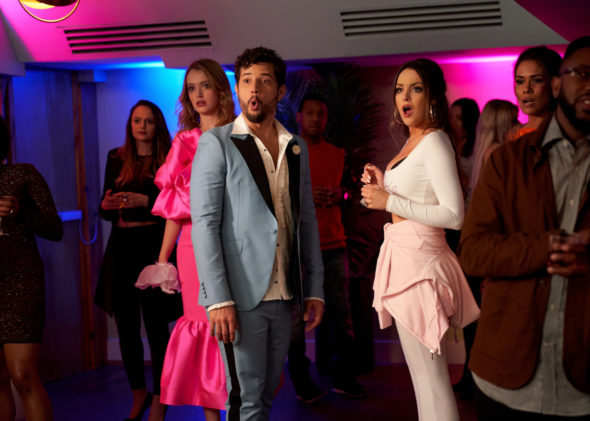 The drama at the Carrington’s is far from over. The CW has renewed the Dynasty reboot series for a fifth season which will air as part of the 2021-22 television season (September 2021 through August 2022). The fourth season will air at some point during the current 2020-21 season. It’s unclear how many episodes will be in either season but the show typically gets 22 installment orders.

Season four of Dynasty stars Elizabeth Gillies, Daniella Alonso, Alan Dale, Sam Adegoke, Robert Christopher Riley, Rafael de la Fuente, Elaine Hendrix, Maddison Brown, Sam Underwood, Michael Michele, Adam Huber, and Grant Show.  A reboot of the 1981 drama series, this show centers on the wealthy Carrington family and their energy empire which they must defend against the Colbys and other adversaries, as well as from each other.

In season four, the Carrington family faces even more romance, intrigue, and riches. Between strangers showing up with new secrets and the family settling old scores, everything in this world is about to get turned on its head. But it’s still a world of privilege and excess as Blake (Show) and Fallon (Gillies) take their empires to new heights. In this family, there are always galas to throw, relationships to destroy, and backs to be stabbed … literally, in some cases.

As part of the fifth season renewal announcement, Mark Pedowitz, Chairman and CEO of The CW network, said, “Though we’re just a few weeks into the new season, we wanted to get a strategic head start on next season with these early renewals, which allows our production teams to start laying out story arcs and hiring staff, and at the same time, continues to provide us with a strong, stable schedule to build on for next season.”

What do you think? Are you a fan of the Dynasty TV show? Are you looking forward to watching season four and season five?

Love the the show! Just saw all the episodes on Netflix. This show made me positive in my life. Great Show!!

Look forward every Friday night soap opera enjoy it and love it. Never missed any episodes of it. So good.

Please please bring back the show. New Dynasty show is the best love the characters so much. I just want the show back on the CW. Please!

Look forward new episodes every episode so good soap opera never missed any episodes of it. Enjoy it and love it.

Please boost your ratings so good love it and enjoy it.

I can’t wait to watch premiere so good love it.

Dynasty on CW is good Tv and should run for decades!

Always my favorite on the CW.

LOVE IT!! I did watch the 80s train wreck, I mean really how many times can someone fall down the stairs lol This up dated yet still true to the original series is fun and campy a true must see with great characters…even though we are on the third crystal…but it did succeed in making it fun and enjoyable. Great work y’all !!

Love the show,can’t wait until season 4and5

Super excited for season 4 of dynasty. Watched three seasons in three weeks on Netflix. Happy to hear it will continue

Yay so exciting so good omg hooked on Netflix caught up on it look forward new season plus more seasons too.