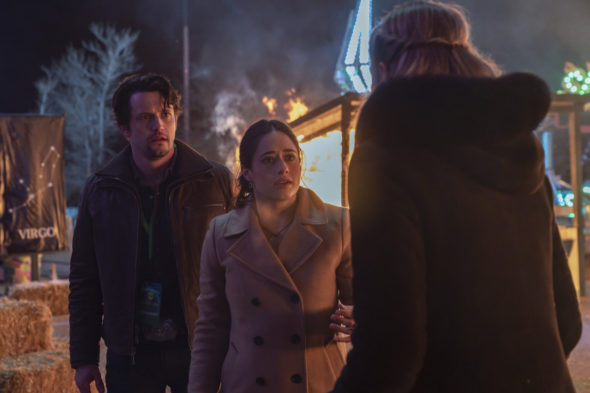 Things will likely get a whole lot stranger in Roswell. The CW has issued an early fourth season renewal for the Roswell, New Mexico TV series. Season four will air during the 2021-22 television season (roughly September 2021 through August 2022). Year three will launch at some point during the current 2020-21 season. It’s unclear how many episodes either season will have.

Based on the Roswell High book series (which was also the basis for a 1999 TV series), this series centers on Liz Ortecho (Mason), who returns to town after a decade away. After reconnecting with her old crush, Roswell PD Officer Max Evans (Parsons), she learns that he, his sister Isobel (Cowles), and their friend Michael (Vlamis), are aliens. In season three, still reeling from the events of last year, the Roswell aliens and their allies are drawn back together through a threat from a familiar stranger and a murder that has not yet happened. From near and from far, amidst breakups, reunions, scientific advancements, and the impending death of someone they hold dear, our heroes must grapple with two central questions: Who enters our lives and defines who we are? And what power do we really have over our own futures?

As part of the fourth season renewal announcement, Mark Pedowitz, Chairman and CEO of The CW network, said, “Though we’re just a few weeks into the new season, we wanted to get a strategic head start on next season with these early renewals, which allows our production teams to start laying out story arcs and hiring staff, and at the same time, continues to provide us with a strong, stable schedule to build on for next season.”

What do you think? Are you a fan of the Roswell, New Mexico TV show? Are you looking forward to watching season three and season four?

So glad it is being renewed for another season. We need something different and fresh on tv and good actors too I also would like to add. The writers are doing a awesome job.

Love Roswell! Love everythong about it and was excited to hear another season coming. Concerns me it is saying 2 hour finale. Hopefully they do not change their minds.

Love Roswell – love the cast – love the story lines – love everything about it! It’s not like all the other shows that all mirror each other – even in their story lines which gets redundant and boring. Roswell keeps you interested and waiting for the next week so you can see what happens. It would be very disappointing if it was cancelled!

I love Roswell, New Mexico the actors are great as well as the writers it is always excellent and has great twist and turns all the time unlike a lot of shows can’t wait for next season I always have my TV set to record all episodes thanks so much for continuing the series