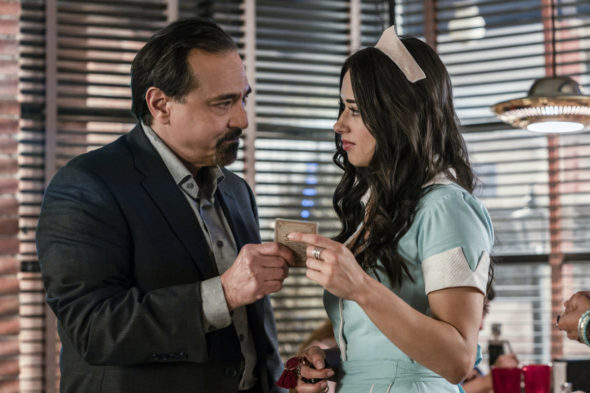 Will Liz be able to really move on? Has the Roswell, New Mexico TV show been cancelled or renewed for a third season on The CW? The television vulture is watching all the latest cancellation and renewal news, so this page is the place to track the status of Roswell, New Mexico, season three. Bookmark it, or subscribe for the latest updates. Remember, the television vulture is watching your shows. Are you?

Airing on The CW television network, Roswell, New Mexico stars Jeanine Mason, Nathan Parsons, Michael Vlamis, Tyler Blackburn, Heather Hemmens, Michael Trevino, Lily Cowles, Trevor St. John, and Amber Midthunder. Based on the Roswell High book series (which was also the basis for a 1999 TV series), this series centers on Liz Ortecho (Mason), who returns to town after a decade away. After reconnecting with her old crush, Roswell PD Officer Max Evans (Parsons), she learns that he, his sister Isobel (Cowles), and their friend Michael (Vlamis), are aliens. In season two, Max has resurrected Liz’s long-dead sister, Rosa (Midthunder), and sacrificed his own life in the process. Liz mourns her lost love by seeking comfort in science, both earthly and extraterrestrial, as Rosa turns to Kyle (Trevino) to help her find her place in the unfamiliar territory of 2019. In their grief, Isobel explores potentially dangerous self-defense, and Michael spirals into some old bad habits, putting his relationships with Maria (Hemmens) and Alex (Blackburn) at risk. Meanwhile, Jesse Manes (St. John) has experienced a change of heart after a medical emergency.

The second season of Roswell, New Mexico averaged a 0.13 rating in the 18-49 demographic and 675,000 viewers. Compared to season one, that’s down by 52% in the demo and down by 36% in viewership. Find out how Roswell, New Mexico stacks up against other The CW TV shows.

We don’t have to wonder if The CW will cancel Roswell, New Mexico. The network has already renewed it for season three. When will it launch? I’ll update this page with breaking developments. Subscribe for free alerts on Roswell, New Mexico cancellation or renewal news.

What do you think? Are you glad that the Roswell, New Mexico TV show has been renewed for a third season? How would you feel if The CW had cancelled this TV series, instead?

Yes. I love the show. haven’t missed a single episode in two seasons.

I love Roswell , New Mexico..one of the best sci-fi ‘s on tv. To much left unresolved ending season 2 . I never miss a show. I might have To dvr it but it’s my favorite on the CW. It rocks!!

I am overjoyed for its renewal. It is my favorite show. Can’t wait to see season 3