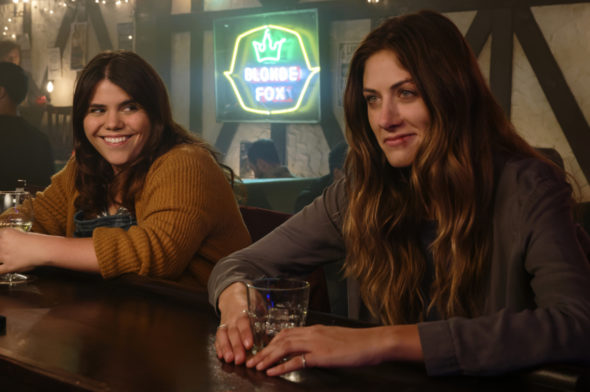 Is there room for more than superhero and supernatural shows on The CW? Has the In the Dark TV show been cancelled or renewed for a third season on The CW? The television vulture is watching all the latest cancellation and renewal news, so this page is the place to track the status of In the Dark, season three. Bookmark it, or subscribe for the latest updates. Remember, the television vulture is watching your shows. Are you?

Airing on The CW television network, the In the Dark TV show stars Perry Mattfeld, Rich Sommer, Brooke Markham, Casey Deidrick, Keston John, Morgan Krantz, and Theodore Bhat. In the series, Murphy (Mattfeld) is a messy twenty-something who struggles on a daily basis to balance her random hookups, her hangovers, and her drug front. She’s also blind. Murphy lives with her supportive best friend, Jess (Markham). Along with their anal-retentive boss (and sometimes a friend), Felix (Krantz), they run Guiding Hope, a school for guide dogs. But, solving the murder of Murphy’s best friend, Tyson, lands her deep in the world of Chicago’s underground heroin trade where she is forced to turn Guiding Hope into a front for a drug kingpin.

The second season of In the Dark averaged a 0.09 rating in the 18-49 demographic and 424,000 viewers. Compared to season one, that’s down by 45% in the demo and down by 33% in viewership. Find out how In the Dark stacks up against other The CW TV shows.

There’s no need to wonder if The CW will cancel or renew In the Dark for season three because the series was renewed months before the second season premiere. I’ll update this page with breaking developments. Subscribe for free alerts on In the Dark cancellation or renewal news.

What do you think? Are you glad that the In the Dark TV show has been renewed for a third season? How would you feel if The CW had cancelled this TV series, instead?

One of my favorites on netflix, but for real so disgusted whit this non stop egocentric, egoist and narcissistic role Murphy, its just kind of to much manipulation and also sexual whit NO REGRETSAT ALL… i was kind of happy when all strated to see how wrong she was and letting her alone..

Honest to God, this is the BEST TV show on the CW & on Netty ( Netflix !!! ) I did binge watch the first hlllpppp PM mmmmmmmmmmmmmmm cc c a

So glad it has season 3 coming. It’s a great show. Love it!

I I don’t want in the dark cancelled! A lot of people like to wait till all episodes are done & binge watch me included . I know a lot of people into this series. Started on season 3 tonight.

I love the show , dont cancel it. Very entertaining.

What an excellent TV series i just rewatched both seasons bing style. I love this show its very exciting to watch the characters and see what happens next. Great group of friends truly will do anything for each other!! Thanks for renewing this. I look forward to watching the new season. Please come out soon it was a wicked cliff hanger ending.

In the Dark is the Best series I have watched! The actions and Suspense is incredible! I couldn’t leave the TV when it was on. I cannot wait for Season 3. Love all the Characters.

Please keep the show on. I love it.

So glad they have renewed a third season. Don’t let me down.

Love the show—the characters and casting! So happy it’s been renewed for Season 3!