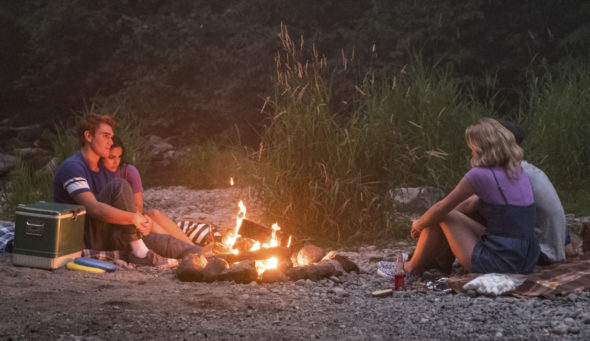 Is Archie Andrews at the end of his rope? Has the Riverdale TV show been cancelled or renewed for a fourth season on The CW? The television vulture is watching all the latest cancellation and renewal news, so this page is the place to track the status of Riverdale, season four. Bookmark it, or subscribe for the latest updates. Remember, the television vulture is watching your shows. Are you?

A CW live-action Archie Comics adaptation, Riverdale stars KJ Apa, Lili Reinhart, Camila Mendes, Cole Sprouse, Marisol Nichols, Madelaine Petsch, Ashleigh Murray, Mädchen Amick, Mark Consuelos, Casey Cott, Skeet Ulrich, and Luke Perry. The third season kicked off with a dark mystery the parents have been keeping a secret, since they were in high school. Meanwhile, Archie (Apa) has been framed for a crime he did not commit, and the new prosecutor, Ms. Wright (Penelope Ann Miller), is gunning for him with gusto.

The third season of Riverdale averaged a 0.36 rating in the 18-49 demographic and 1.05 million viewers. Compared to season two, that’s down by 26% in the demo and down by 23% in viewership. Learn how Riverdale stacks up against the other CW TV shows.

Will The CW cancel or renew Riverdale for season four? The show grew in both the demo and total audience size last year and continues to do well. I believe it will be renewed. I’ll keep an eye on the Nielsens and update this page with breaking developments Subscribe for free updates on any Riverdale cancellation or renewal news.

1/31/19 Update: The CW has renewed the Riverdale TV show for a fourth season. Details here.

What do you think? Are you glad that the Riverdale TV show has been renewed for season four? How would you feel if this CW TV series had ended here?

Today it was renewed for Four season !

RIVERDALE is a great show! It needs to continue to a 4th season and more!!!