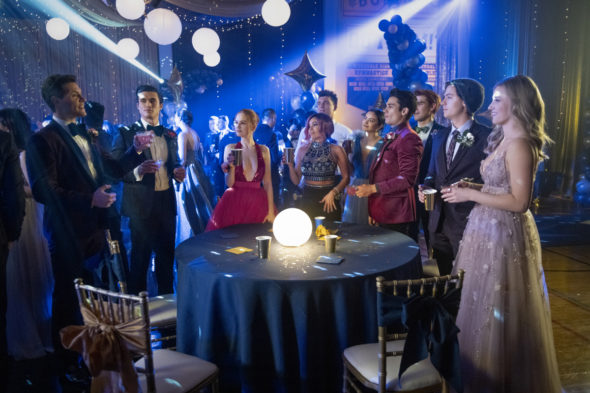 What does the future hold? Has the Riverdale TV show been cancelled or renewed for a sixth season on The CW? The television vulture is watching all the latest cancellation and renewal news, so this page is the place to track the status of Riverdale, season six. Bookmark it, or subscribe for the latest updates. Remember, the television vulture is watching your shows. Are you?

Airing on The CW television network, Riverdale stars KJ Apa, Lili Reinhart, Camila Mendes, Cole Sprouse, Madelaine Petsch, Madchen Amick, Casey Cott, Mark Consuelos, Charles Melton, Vanessa Morgan, Erinn Westbrook, and Drew Ray Tanner. Based on the characters from the Archie Comics, this show focuses on the seemingly quiet town of Riverdale and some of its teen residents, including Archie (Apa), Betty (Reinhart), Veronica (Mendes), and Jughead (Sprouse). They discover the darkness and dangers that bubble underneath their town’s wholesome façade. In season five, the gang bids farewell to high school and, in some cases, to each other as many of the characters go their separate ways. Then, the story moves forward in time. The former teen classmates are now young adults who return to Riverdale to escape their troubled pasts.

The fifth season of Riverdale averaged a 0.11 rating in the 18-49 demographic and 461,000 viewers. Compared to season four, that’s down by 51% in the demo and down by 37% in viewership. Find out how Riverdale stacks up against other CW TV shows.

Will The CW cancel or renew Riverdale for season six? The network has been renewing almost all of its established TV series each year while ending just one or two to help make room on the schedule for new shows. I believe that Riverdale will be renewed but would not be surprised if season six ended up being the final year. I’ll update this page with breaking developments. Subscribe for free alerts on Riverdale cancellation or renewal news.

2/3/21 update: Riverdale has been renewed for a sixth season on The CW.

What do you think? Are you glad that the Riverdale TV show has been renewed for a sixth season? How would you feel if The CW had cancelled this TV series, instead?

I have enjoyed most of the episodes,but here lately the sing acting is becoming annoying!! I do not want to hear every episode done in singing!!

watched every episode since the start ,will keep on watching! 🙂

Please boost ratings so good look forward this season. Every episode hopefully get renewed another season.