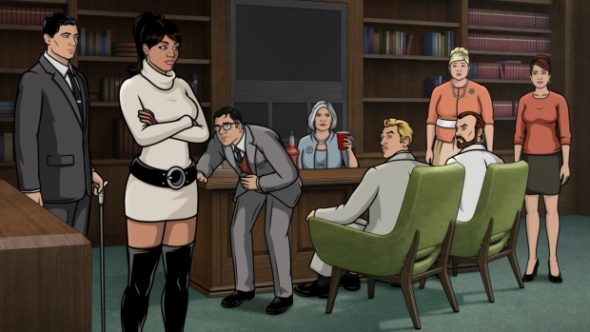 Will the ratings continue to rise this year? Has the Archer TV show been cancelled or renewed for a 13th season on FXX? The television vulture is watching all the latest cancellation and renewal news, so this page is the place to track the status of Archer, season 13. Bookmark it, or subscribe for the latest updates. Remember, the television vulture is watching your shows. Are you?

Airing on the FXX cable channel, Archer stars the voices of H. Jon Benjamin, Aisha Tyler, Jessica Walter, Judy Greer, Chris Parnell, Amber Nash, Adam Reed, and Lucky Yates. Guests include Pamela Adlon, Eric Andre, Bruce Campbell, Harvey Guillén, Kayvan Novak, and Stephen Tobolowsky. The show follows the exploits of a group of dysfunctional secret agents and the supporting staff of the International Secret Intelligence Service (ISIS). In season 12, Archer (Benjamin) and the gang face a new threat: a spy conglomerate known as IIA (International Intelligence Agency). With a limited number of spy jobs up for grabs, can the Agency compete against the soulless vultures of IIA, or will our mom-and-pop spy agency be the next to get swallowed alive?

The 12th season of Archer averaged a 0.09 rating in the 18-49 demographic and 228,000 viewers in the live+same day ratings (includes all DVR playback through 3:00 AM). Compared to season 11, that’s down by 35% in the demo and down by 28% in viewership in the live+same day ratings (including DVR playback through 3:00 AM). While these numbers don’t include further delayed or streaming viewing, they are a very good indicator of how a show is performing, especially when compared to others on the same channel. Though other economic factors are involved, the higher-rated shows usually get renewed and the lower-rated ones get cancelled. Find out how Archer stacks up against other FXX TV shows.

Will FXX cancel or renew Archer for season 13? The series continues to be popular for the cable channel and last season, its traditional ratings actually grew — a rarity these days. Though the late great Jessica Walter was an important part of the series, FX has indicated that they plan to continue the show. I’ll update this page with breaking developments. Subscribe for free alerts on Archer cancellation or renewal news.

What do you think? Are you glad that the Archer TV show has been renewed for a 13th season? How would you feel if FXX had cancelled this TV series, instead?

I’ll miss Mallory, but I’m an Archer addict. I look forward to season 13.