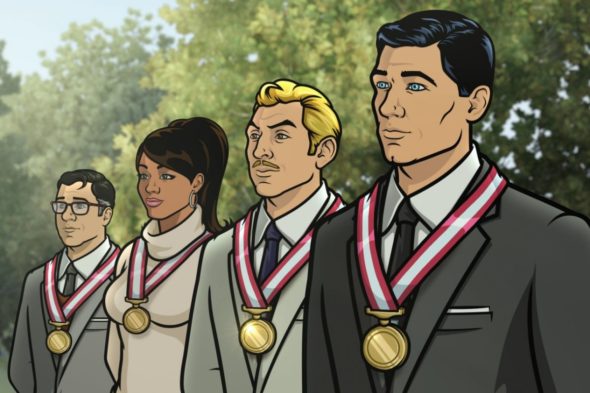 Can ISIS beat IIA in the 12th season of the Archer TV show on FXX? As we all know, the Nielsen ratings typically play a big role in determining whether a TV show like Archer is cancelled or renewed for season 13. Unfortunately, most of us do not live in Nielsen households. Because many viewers feel frustrated when their viewing habits and opinions aren’t considered, we invite you to rate all of the 12th season episodes of Archer here.  *Status Update Below.

An FXX animated spy comedy, Archer stars the voices of H. Jon Benjamin, Aisha Tyler, Jessica Walter, Judy Greer, Chris Parnell, Amber Nash, Adam Reed, and Lucky Yates. Guests include Pamela Adlon, Eric Andre, Bruce Campbell, Harvey Guillén, Kayvan Novak, and Stephen Tobolowsky. The show follows the exploits of a group of dysfunctional secret agents and the supporting staff of the International Secret Intelligence Service (ISIS). In season 12, Archer (Benjamin) and the gang face a new threat: a spy conglomerate known as IIA (International Intelligence Agency). With a limited number of spy jobs up for grabs, can the Agency compete against the soulless vultures of IIA, or will our mom-and-pop spy agency be the next to get swallowed alive?

What do you think? Which season 12 episodes of the Archer TV series do you rate as wonderful, terrible, or somewhere between? Do you think that Archer should be cancelled or renewed for a 13th season on FXX? Don’t forget to vote, and share your thoughts, below.