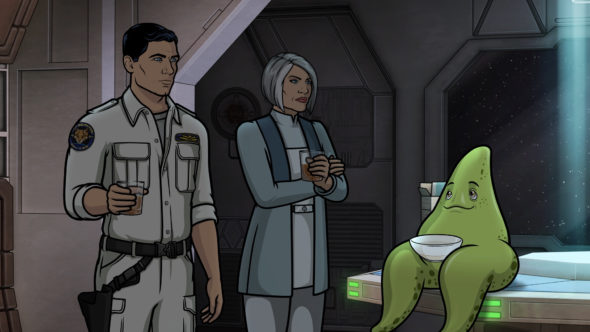 Is the 10th season of the Archer TV show on FXX out of this world? As we all know, the Nielsen ratings typically play a big role in determining whether a TV show like Archer is cancelled or renewed for season 11. Unfortunately, most of us do not live in Nielsen households. Because many viewers feel frustration when their viewing habits and opinions aren’t considered, we invite you to rate all of the Archer season 10 episodes for us here. *Status update below.

What do you think? Which season 10 episodes of the Archer TV series do you rate as wonderful, terrible, or somewhere between? Should FXX cancel or renew Archer for an 11th season? Don’t forget to vote, and share your thoughts, below.

I cannot visualise a day without Sterling Archer and his ISIS malcontents.
The skilled dialogue quickly lifts each episode from cartoon to life observation of close friends.
Rarely in the history of TV entertainment do all elements coalesce so effectively to create a far greater whole than it’s already formidable parts.
We cannot wait the return to health and to our screens of Sterling MalloryArcher – the worlds greatest adult entertainment series.
Please let us see more of Cheryl and Pam too ( PHRASING – we still doing it ?)

Archer is awesome. I hope it goes on forever.

Archer needs to continue, some record the show and watch it later. 100s of thousands if not millions of views will be disappointed if we do not see archer come out the coma. Please also bring back to Netflix.