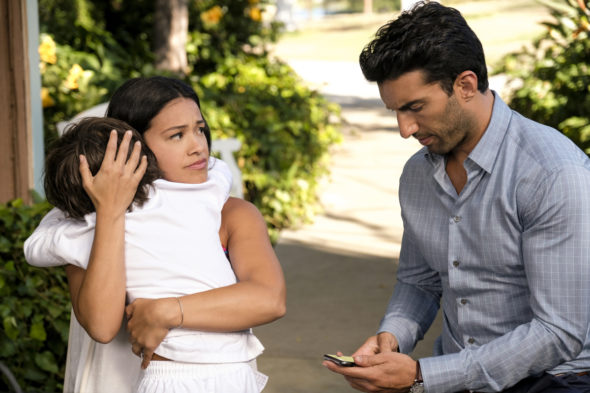 How’s life for Jane Villanueva during the fifth and final season of the Jane the Virgin TV show on The CW? As we all know, the Nielsen ratings typically play a big role in determining whether a TV show like Jane the Virgin is cancelled or renewed for season six. Unfortunately, most of us do not live in Nielsen households. Because many viewers feel frustration when their viewing habits and opinions weren’t considered when The CW decided to end this series with its 100th episode, we’d like to offer you the chance to rate all the Jane the Virgin season five episodes here.

A satirical CW telenovela, Jane the Virgin stars Gina Rodriguez, Andrea Navedo, Yael Grobglas, Ivonne Coll, Jaime Camil, Brett Dier, and Justin Baldoni. Although saving herself for marriage, Jane (Rodriguez) was accidentally impregnated via artificial insemination, had the baby, and went on to become a published author. The fifth and final season kicks off in the wake of two big cliffhangers: the mystery of who JR shot; and how Jane saw her late husband, Michael (Dier), standing in Rafael’s (Baldoni) apartment.

What do you think? Which season five episodes of the Jane the Virgin TV series do you rate as wonderful, terrible, or somewhere between? Do you agree with The CW’s decision to end Jane the Virgin with the fifth season? Don’t forget to vote, and share your thoughts, below.

Great show. Love the characters don’t want this to end