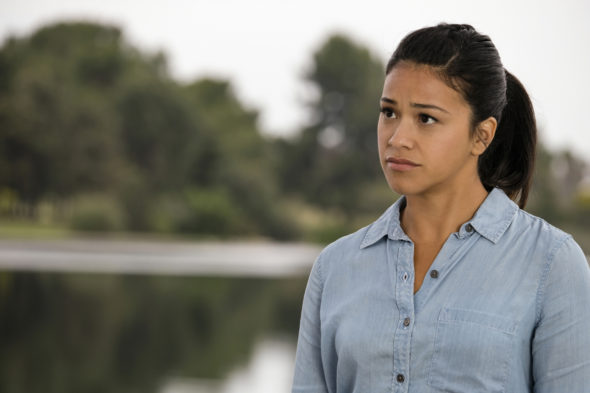 Will Jane Villanueva live happily ever after? Has the Jane the Virgin TV show been cancelled or renewed for a sixth season on The CW? The television vulture is watching all the latest cancellation and renewal news, so this page is the place to track the status of Jane the Virgin, season six. Bookmark it, or subscribe for the latest updates. Remember, the television vulture is watching your shows. Are you?

A satirical telenovela airing on The CW television network, Jane the Virgin stars Gina Rodriguez, Andrea Navedo, Yael Grobglas, Ivonne Coll, Jaime Camil, Brett Dier, and Justin Baldoni. Although saving herself for marriage, Jane (Rodriguez) was accidentally impregnated via artificial insemination, had the baby, and went on to become a published author. The fifth and final season kicks off in the wake of two big cliffhangers: the mystery of who JR shot; and how Jane saw her late husband, Michael (Dier), standing in Rafael’s (Baldoni) apartment.

The fifth season of Jane the Virgin averaged a 0.22 rating in the 18-49 demographic and 623,000 viewers. Compared to season four, that’s down by 8% in the demo and down by 1% in viewership. Learn how Jane the Virgin stacks up against the other CW TV shows.

Will The CW cancel or renew Jane the Virgin for a sixth season? Technically, neither. The network already announced that the fifth season is the final installment of this series and is working on a spin-off of sorts. I’ll keep an eye on the ratings, finalize my dinner plans, and update this page as the ratings roll in. Subscribe for free updates on any Jane the Virgin cancellation and renewal news.

What do you think? Is season five the right time to end the Jane the Virgin TV show? If it were up to you, would Jane the Virgin be cancelled or renewed for a sixth season on The CW?

I just finished watching all the seasons of Jane the virgin, I was really hoping there was more seasons like was that really rose?
I really loved this show

Hello, im not much of a writer but in Jane the Virgin it was so relatable and I absolutely loved this show!!!!! I have been binge watching it for the past month and i am on my last season now. I have cried so much in the show I could fill up five 5 gallon buckets and that was just with the first 2 seasons. If a season 6 and possibly 7 comes out would be so awesome and i would watch it. See I tried start Jane The Virgin a few years back but i just could not get… Read more »

There’s got to be a season 6. It cannot end with her just getting married. We’ve got to see her miraculously get pregnant by Raphael and he can find out that the twins are not really his. There’s so much more that could be added to the storyline

Renewed. It’s a great family show and it’s full of love, family, and over coming obstacles we all are faced with in our lives. It teaches great values we take for granted and reminds us of the important things in life. It helps us to reflect on ourselves and our own family and insecurities and to not fear but to rise to the challenges that life brings through the love and grace of our Heavenly Father. It’s a rare look into a family you all want to be a part of and it’s a nice place to come home to.

More!!!!! I can’t believe they would even consider ending it! The entire cast was amazing. I can relate to so many things in this show. I loved seeing so many famous Latinos/Latinas (OMG). I was totally “Team Rafael”. I was so proud to see so many Boricuas in the cast. I CAN’T GET ENOUGH! This show was hilarious! The Narrator was a riot!!! Bring the show back!!!

I need more jane the Virgin!