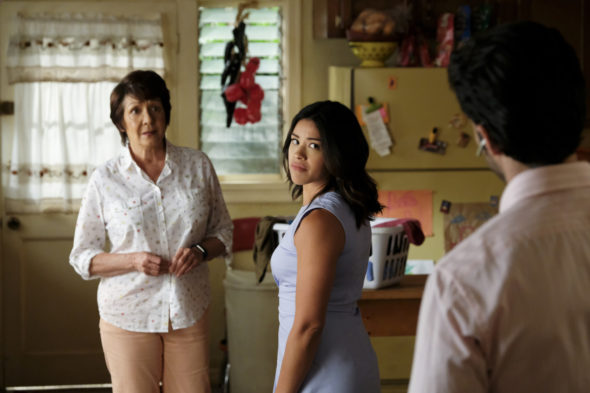 Is tragedy or triumph in the cards for Jane Villanueva? Has the Jane the Virgin TV show been cancelled or renewed for a fifth season on The CW? The television vulture is watching all the latest cancellation and renewal news, so this page is the place to track the status of Jane the Virgin, season five. Bookmark it, or subscribe for the latest updates. Remember, the television vulture is watching your shows. Are you?

A satirical telenovela airing on The CW television network, Jane the Virgin stars Gina Rodriguez, Andrea Navedo, Yael Grobglas, Ivonne Coll, Jaime Camil, and Justin Baldoni. Although saving herself for marriage, Jane (Rodriguez) gets pregnant, thanks to accidental artificial insemination, which turns her life upside down. The fourth season picks up three years after the season three finale, with the widowed (and no longer virginal) Jane drawing upon her grief to write a book which recounts her love story with the late Michael (Bret Dier). She and Rafael (Baldoni) are now close friends, but unlike his other kids, their son Mateo (Elias Janssen) is full of mischief. In other news, Petra (Grobglas) and her twin sister Anezka wind up persons of interest in the murder of Scott (Wes Armstrong).

The fourth season of Jane the Virgin averaged a 0.24 rating in the 18-49 demographic and 631,000 viewers. Compared to season three, that’s down by 31% and down by 34%, respectively. Learn how Jane the Virgin stacks up against the other CW TV shows.

Will The CW cancel or renew Jane the Virgin for a fifth season? The ratings are way down (thanks in part to the move to Friday night) but it’s one of the few CW shows to receive any critical attention. In part, because The CW will start programming Sunday nights (and will need 20% more programming than usual), I suspect that Jane the Virgin will be renewed for a fifth season. I’ll keep an eye on the ratings, put together a dinner menu, and update this page as we get more data. Subscribe for free updates on any Jane the Virgin cancellation and renewal news.

5/17/2018 Status Update: Jane the Virgin will end with season five on The CW. Details here.

What do you think? Are you glad that the Jane the Virgin TV show has been renewed for a fifth season? Is that the right time to end it. Let us know

I love Jane The Virgin!!!! Without it my summer would have been a total wreck! Totally hope season five is released soon!

Please do season five I’m in love with the show . You start a show with four season into to it . Need to finish the show

Please renew Jane The Virgin for Season 5. The last episode left its viewers hanging unto Jane’s presumably deceased husband returning from the dead. At least, give us a few episodes with the last being a full 2-hour episode, resolving the mystery and hopefully, bestowing a happy ending to Jane’s and all the characters’ goals and dreams.

I absolutely love JTV!!! It is my favorite show and I need a good ending before they cut this thing off because season 4 ended crazy! JTV shows what it’s like in an “irregular” family and not the “perfect family” stereotype.

Jane the Virgin absolutely has to continue into season 5! Too many cliffhangers for it to be canceled. Not to get toooo crazy but the 5th season hasn’t come out yet and I already want there to be a 6th! On behalf of everyone who watches and or watched, there NEEDS to be another season.