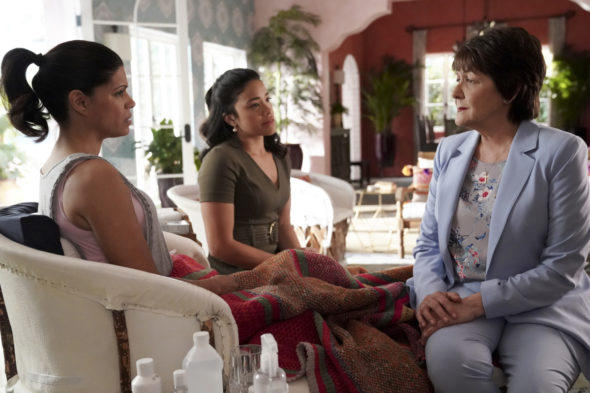 It’s official. Although it’s not “cancelled,” because it was just renewed, the upcoming fifth season of the Jane the Virgin TV show will be its final outing on The CW. Star Gina Rodriguez had implied the romantic comedy-drama would end with season five, but in late April, creator Jennie Snyder Urman said she could not confirm Jane the Virgin would end its acclaimed, but low-rated run next year. The CW released its Fall 2018 Schedule today, and Jane wasn’t listed, so expect the fifth and final installment to bow in the mid-season.

At today’s Upfront presentation in New York, overall, The CW announced/confirmed that the upcoming installments of iZombie, Jane the Virgin, and Crazy Ex-Girlfriend, will be their final seasons. While the iZombie fifth season renewal was just issued during the May 11th pre-Upfronts rush, both Jane the Virgin (season five) and Crazy Ex-Girlfriend (season four) were picked up for their final seasons on April 2nd, when the network renewed the bulk of its shows.

What do you think? Is the Jane the Virgin TV series ending at the right time? If it were up to you, would The CW cancel or renew it for season six?

I am with everyone else…why cancel a show that has so much character and so much emotional things in it. This series made me cry, laugh, get angry, be happy, all the emotions a human being goes through. You would be foolish to not have a sixth season. Please think it over. Love the characters.

PLEASE PLEASE PLEASE DO NOT END IT WITH SEASON 5. PLEASE ADD SEASON 6. I ABSOLUTELY LOVED THE SHOW. PLEASE RENEW

Loved this show, the acting was superb and the story line was sooooo entertaining and the characters are awesome. Do not understand how this show for season 6 has not been renewed and the ones that are(some of them) are boring and not entertaining at all. This show is great

I just finished this Show and I absolutely fell in love with it!! It has everything I love!! I want to see more please. Bring it back. It is the best show I have seen in a long time. So clever and unique and very funny!!

Don’t cancel the show. We want to see more!!

Again another great series that gets the can! just when i think this network is solid, bam disappointed again. i get really tired of starting a series only to discover that the show has been cancelled and no finish to any of the story lines. horrible but seems to be CW mo. too bad makes me want to stop watching your shows and stick to just movies.

I had never watched the series and then got hooked! There writers were able to give a glimpse of family life and current issues such as immigration in a thoughtful way.
I hope we see more about Jane and Rafael, as well as Petra and the rest of the family. Would also like to see more about Luisa and Sin Rostra. I laughed and cried through the shows.

Please do not cancel this show. There is finally something worth watching. Love the cast

Love Jane the Virgin! Please don’t cancel. It’s funny, interesting, exciting great cast and different from most shows. But I learned from my other favorite Canceled soaps not to get my hopes up☹️.

No way can you stop this AMAZING show! Please don’t stop this