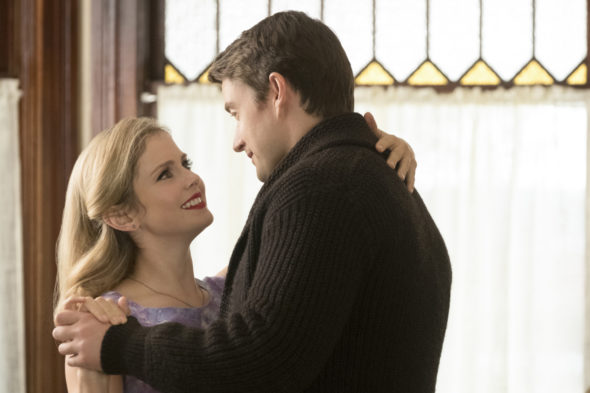 On May 11th, the iZombie TV show on The CW was renewed for a fifth season, so it’s not exactly accurate to say it has been cancelled. It turns out though, that renewal was for a fifth and final season of the undead procedural from Veronica Mars creator Rob Thomas. This morning on social media, star Rose McIver confirmed there would be no season six of iZombie. The news broke at today’s CW Upfront presentation in New York.

A CW horror dramedy, iZombie stars McIver as zombie/medical examiner Liv Moore. The “rom-com-zom-dram” also stars Malcolm Goodwin, Rahul Kohli, Robert Buckley, and David Anders. When Liv eats the brains of a deceased person, she temporarily inherits some traits from the person and gains insight into how he or she died. Pretending that she has psychic abilities, Liv then uses this knowledge to help the police solve crimes.

No Season Six for iZombie on The CW


So the fifth season of #iZombie will be our last. I am therefore committed and excited to make it the best one yet! Really proud to be on a show that celebrates the misfits and I pinch myself every day that I get to be a part of the iZombie world with you guys. Thank you ❤️


And also – how do you think the series should end? I know people who know people. *as the writers’ room sends all my emails to spam folder* #iZombie 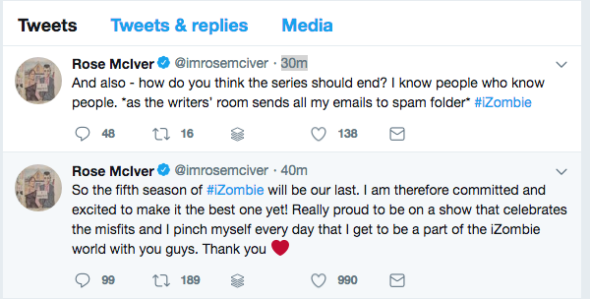 Overall, today, The CW announced/confirmed that the upcoming installments of iZombie, Jane the Virgin, and Crazy Ex-Girlfriend, will be their final seasons. While the iZombie fifth season renewal was just issued during the May 11th pre-Upfronts rush, both Jane the Virgin (season five) and Crazy Ex-Girlfriend (season four) were picked up for the final seasons on April 2nd, when the network renewed the bulk of its shows.

This is something of a week of endings for McIver. She also played Tinker Bell on Once Upon a Time, which ends its seven season run on ABC, on Friday, May 18th.

What do you think? Are you a fan of the iZombie TV series? Do you think season five is the right time to end it? If it were up to you, would The CW cancel or renew iZombie for season six?

I just got done watching all five seasons of I Zombie was so disappointed to hear that there would be no new seasons! 🙁

I just got done watching all five seasons of I Zombie on Netflex really loved the show so disappointing to year that there will not be any new seasons! 🙁