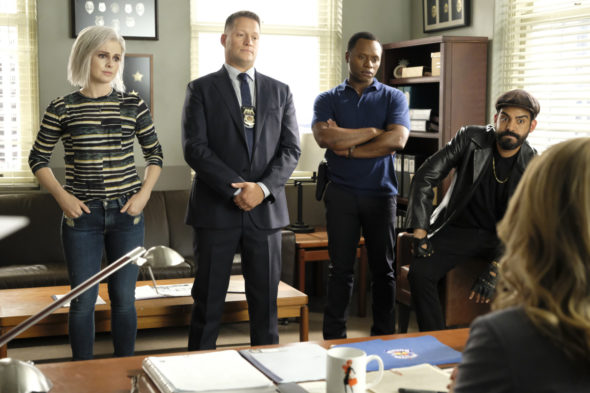 Is the fifth and final season of The CW’s iZombie TV show a proper send-off for Liv Moore? As we all know, the Nielsen ratings typically play a big role in determining whether a TV show like iZombie is cancelled or renewed for season six. Unfortunately, most of us do not live in Nielsen households, and our viewing habits weren’t factored into the decision to end the series this year. Because many viewers feel frustration when opinions aren’t considered, we’d like to offer you the chance to rate all of the iZombie season five episodes here.

A CW horror dramedy, iZombie stars Rose McIver as zombie/medical examiner Liv Moore. The “rom-com-zom-dram” also stars Malcolm Goodwin, Rahul Kohli, Robert Buckley, David Anders, Aly Michalka, and Bryce Hodgson. When Liv eats the brains of the deceased, she temporarily inherits some traits from the person and gains insight into how he or she died. Pretending that she has psychic abilities, Liv then uses this knowledge to help the police solve crimes. In season five, Liv and crew are trying to maintain peace in the zombie state of New Seattle, with never a moment’s rest.

What do you think? Which season five episodes of the iZombie TV series do you rate as wonderful, terrible, or somewhere between? Is it ending at the right time? Should The CW have cancelled or renewed iZombie for a sixth season?

You need to renew for a season 6. It can’t just end like that. What happens with Ravi and Peyton, Clive and Dale and their kids, and all the kids liv saved? We need more seasons please!

when will izombie season 6 release on Netflix? date revealed and I want her to be a zombie in season 6 and Olivia “Liv” Moore can get Marrie with Major Lilywhite and Dr. Ravi Chakrabarti can get marrie with Peyton Charles and have kids and i want him to become a zombie Clive Babineaux and he can get marrie to his wife iZombie as FBI agent “Dale” Anne Babineaux.

This was a horrible time in the storyline to close the series… there are so many questions left unanswered and plots opened that surely could have warranted, at the very least, one more season. Why bring in new characters (Liv’s Dad for instance) and leave us wondering what would happen? The final episode really leaves us hanging!!! It was an excellent series – very well written – great acting – it’s just a real shame that it ended the way it did. I don’t know how it works. I don’t know if the writers know ahead of time that the… Read more »

I think getting rid of iZombie is a huge mistake maybe if people didn’t have to wait so long you’d retain your audience! Like you been dragging out the 100 for years honestly I thought it was cancelled years ago! iZombie was supposed to be safe and going into syndication? What happened the ratings are up there! I really don’t know how they pull this cuz some with the exact same ratings gets renewed and the ones Im into get dropped!

I’m glad the series is bringing everything to a close. I hate it when they cancel series and all the plots are just left hanging.