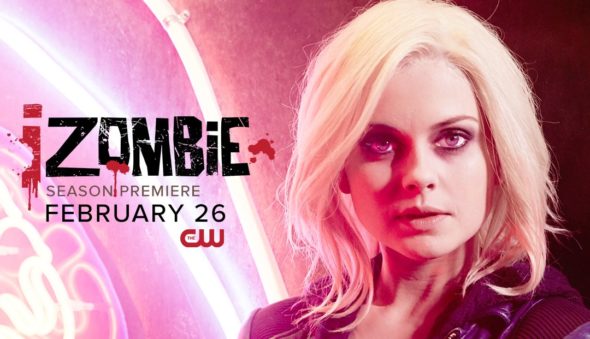 Like Rob Thomas’ cancelled series, Veronica Mars, his iZombie TV show has lived its (un-) life high atop the cancellation—renewal bubble. While this undead medical examiner has yet to surpass the teen P.I.’s episode count, she now has more seasons under her belt. Still, the ratings dropped sharply last year, and now the show has moved from Tuesdays to Mondays. At this point, we’re left wondering when it will bottom out. Will iZombie be cancelled or renewed for season five? Stay tuned.

Inspired by the Chris Roberson—Michael Allred comic book series, iZombie stars Rose McIver as zombie/medical examiner Liv Moore. The CW “rom-com-zom-dram” also stars Malcolm Goodwin, Rahul Kohli, Robert Buckley, and David Anders. When Liv eats the brains of a deceased person, she temporarily inherits some traits from the person and gains insight into how he or she died. Pretending that she has psychic abilities, Liv then uses this knowledge to help the police solve crimes. **Status updates below.

5/29 update: You can see the rest of the latest night’s ratings.

What do you think? Do you like the iZombie TV series? Do you think it should be cancelled or renewed for a fifth season?

Original, creative and witty, hilarious, brilliantly written right down to the comic style sub texts, well developed characters, amazing talent/acting, never dull! Sorry to hear folks complain about it simply because some other show they liked was canceled, that complaining is irrelevant here! This is about iZombie which is truly entertaining, great show, keep up the good work!

why they keep boring rubbish like this show and go and cancel really good ones like the Crossing and a few others i may add, its so odd

Why they renew this useless piece of cr@p?

I think, is just bc shes captain marvel and CW think that will be a good publicity for the channel.

Keep jerking the day, time, etc. and death will soon follow. Show is quick and although it can seem repetitive on occasion. Seems like they have given up because pnce theu start jerking around days and timex it’s curtains. Was funny and cute.

One of those guilty pleasure shows. Characters are all good but, Blaine is by far the best. He should have had a larger role. If this is the end, thanks to the crew & cast. It was entertaining.

The show was amazing during the first 3 seasons. Sadly, season 4 pushed it too much into a zombie show. I liked izombie when it seemed to be just a virus that was disrupting a small amount of people. But now, no, too action-y for my tastes. This is the reason I don’t watch zombie shows. Really heartbreaking because I loved the quiet, funny, dramatic scenes between friends in the earlier seasons. Really made you think. And the brain effects these days have gotten too extreme and unbelievable. I have no idea why they pushed it months past the vaccination… Read more »

Time to see it cancel, I just watched the first season and really disgusted it.