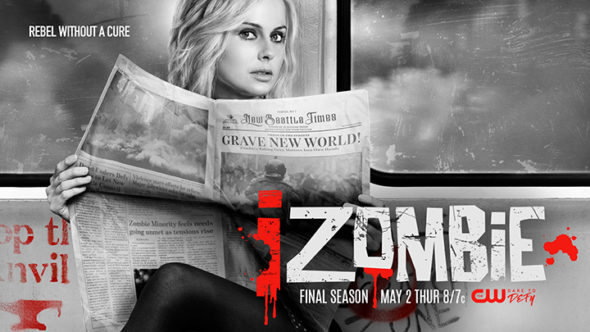 Every year, fans of the iZombie TV show have wondered whether it would be cancelled or renewed for another season on The CW. Since this is the fifth and final season, sit back and enjoy it. Although no season six renewal is headed our way, there’s still plenty of story to tell, and at least Rob Thomas and the writers room knew in advance that the end was nigh. Meanwhile, we’ll keep an eye on the ratings, so stay tuned.

Inspired by the Chris Roberson—Michael Allred comic book series, iZombie stars Rose McIver as zombie/medical examiner Liv Moore. The CW “rom-com-zom-dram” also stars Malcolm Goodwin, Rahul Kohli, Robert Buckley, David Anders, Aly Michalka, and Bryce Hodgson. When Liv eats the brains of the deceased, she temporarily inherits some traits from the person and gains insight into how he or she died. Pretending that she has psychic abilities, Liv then uses this knowledge to help the police solve crimes. In season five, Liv and crew are trying to maintain peace in the zombie state of New Seattle, with never a moment’s rest.

8/2 update: You can see the latest night’s ratings in context.

For comparisons: The fourth season of iZombie averaged a 0.25 rating in the 18-49 demographic with 754,000 total viewers.

What do you think? Is the iZombie TV series ending at the right time? If it were up to you, would this CW TV show have been renewed for season six?

Fun show. Great cast. Thanks All.

I wish this show would continue