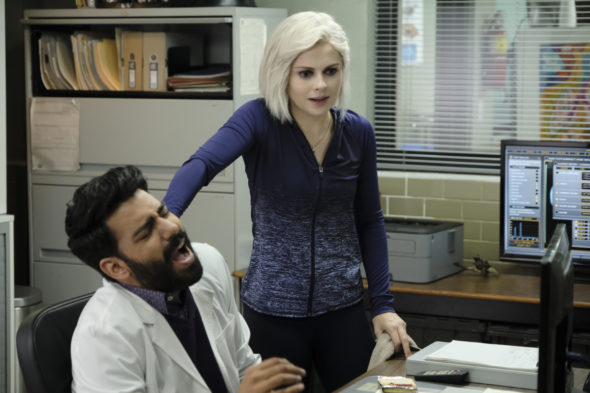 Is this the end for Liv Moore? Has the iZombie TV show been cancelled or renewed for a sixth season on The CW? The television vulture is watching all the latest cancellation and renewal news, so this page is the place to track the status of iZombie season six. Bookmark it, or subscribe for the latest updates. Remember, the television vulture is watching your shows. Are you?

A CW horror dramedy, iZombie stars Rose McIver as zombie/medical examiner Liv Moore. The “rom-com-zom-dram” also stars Malcolm Goodwin, Rahul Kohli, Robert Buckley, David Anders, Aly Michalka, and Bryce Hodgson. When Liv eats the brains of the deceased, she temporarily inherits some traits from the person and gains insight into how he or she died. Pretending that she has psychic abilities, Liv then uses this knowledge to help the police solve crimes. In season five, Liv and crew are trying to maintain peace in the zombie state of New Seattle, with never a moment’s rest.

The fifth season of iZombie averaged a 0.19 rating in the 18-49 demographic and 654,000 viewers. Compared to season four, that’s down by 23% and 13%, respectively. Learn how iZombie stacks up against the other CW TV shows.

Don’t spend any time wondering whether The CW will cancel or renew iZombie for season six. Shortly after it issued the season five renewal, the network announced that the fifth season would be the final installment of iZombie. I’ll still keep an eye on the ratings and update this page as the season progresses, so subscribe for free iZombie cancellation and renewal alerts.

What do you think? Is the iZombie TV series ending at the right time, or like Liv, is there still more life left in it? If it were your call, would The CW cancel or renew iZombie for season six?

I just started watching it and I love it!

People, PEOPLE! They (TV execs) cancel EVERYTHING! Haven’t you learned that yet? That’s why I don’t invest my time in them. I wait until they make it five or more season, and then I buy the DVD series and binge-watch it. I will NEVER get caught up in a show again, just to have it canceled by greedy, dirtbags at corporate channels. NNEEEVVVVVEEEERRRRRRR!!!!!

Bring back iZombie for a 6th season! Do it now!!! Please?

I can’t believe y’all cancelled this show!!! I binged watched iZombie because it was so good. There is SOOOOO MICH LIFE LEFT.. What ever happened to Blaine, Don E, and Lucifer (Blaine’s dad)- I know they’re in the well, BUT someone could have gotten them out. And you don’t end a show completely after Liv and Major told them about Zombie island and Peyton said, okay. It sounded like they all wanted to go and stick together.. you could have showed Seattle now and done a whole bunch of stuff with Zombie Island. You can’t just let it hang forever!!… Read more »

We need more!!!! How about Blaine his dad and DonE could resurface the zombie virus kidnapping and infecting babino’s child forcing the cast to come together

I had heard the writer(s) had enough ideas to keep the show going for years. There cast was great and all the shows were great as well. I think it’s a shame its been canceled. Some people like myself don’t watch a show every week sometimes it’s later and binge watch. I think there are still thousands of fans out there who would love to watch a sixth season.

i drake comes back to life that would be so awsome

did liv and blain ever kiss