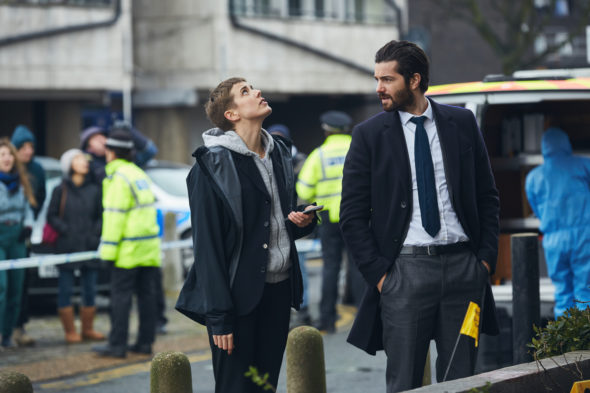 Have detectives Charlie Hicks and Elaine Renko learned to work together? Is the Hard Sun TV show cancelled or renewed for a second season on Hulu? The television vulture is watching all the latest TV cancellation and renewal news, so this page is the place to track the status of Hard Sun, season two. Bookmark it, or subscribe for the latest updates. Remember, the television vulture is watching your shows. Are you?

A Hulu pre-apocalyptic crime drama, Hard Sun stars Jim Sturgess, Agyness Deyn, Nikki Amuka-Bird, Jojo Macari, Derek Riddell, Owain Arthur, Varada Sethu, Adrian Rawlins, Lorraine Burroughs, Aisling Bea, and Joplin Sibtain. Although DI Elaine Renko (Deyn) and DCI Charlie Hicks (Sturgess) are mismatched, these partners are out to enforce the laws and keep safe their loved ones, as encroaching natural disaster threatens to end the world. While investigating a murder in London’s inner city, the duo uncovers proof that the world will be destroyed in five years. Because the British government is desperate to keep that information secret, Security Service (i.e. MI5) operatives are out to silence Hicks and Renko — permanently.

Unless they decide to publicize viewership, it is hard to predict if Hulu will cancel or renew Hard Sun for a first season, so let’s look what we do know. The series is a co-production between the BBC and Hulu. Seven Network in Australia and ZDF in Germany have already acquired the rights. Hard Sun comes from writer Neil Cross, who also created the popular Luther series. Cross has told Radio Times that he’s sketched out a five-season plan. Unfortunately, it wasn’t to be. Subscribe for free Hard Sun cancellation or renewal alerts.

What do you think? Should Hulu have renewed the Hard Sun TV series for season two? How long do you think this sci-fi series should have run?

I think it’s outrageous that Hulu canceled hard sun. I’m so over networks doing that and now streaming services do the same thing. I think that there should be some accountability from Hulu for drawing in an audience and not giving them a proper ending. We gave up time to watch the series with no pay off. If your gonna do this you need to be upfront on your platform and give the viewer the information that the series only has 1 season and no ending so no closure! Give me the choice to watch it or skip it as… Read more »