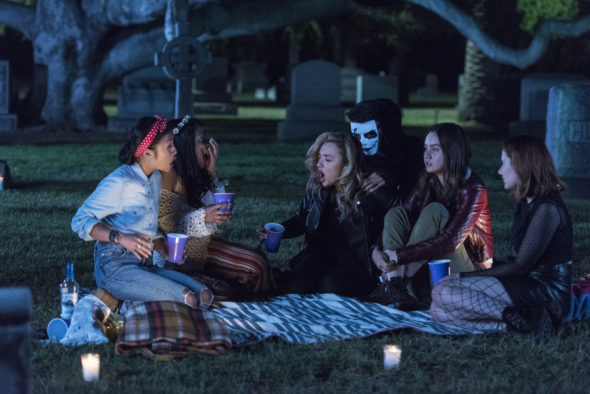 Does the curse continue? Has the Light as a Feather TV show been cancelled or renewed for a second season on Hulu? The television vulture is watching all the latest TV cancellation and renewal news, so this page is the place to track the status of Light as a Feather season two. Bookmark it, or subscribe for the latest updates. Remember, the television vulture is watching your shows. Are you?

A Hulu supernatural thriller, Light as a Feather stars Liana Liberato, Haley Ramm, Ajiona Alexus, Brianne Tju, Peyton List, Jordan Rodrigues, Dylan Sprayberry, Jordan Rodrigues, Brent Rivera, and Dorian Brown Pham. From creator R. Lee Fleming Jr. and based on the Zoe Aarsen book, the drama centers on centers on McKenna Brady (Liberato), a shy, popular high school senior, whose twin sister, Jennie (Liberato) is deceased. When a new student, Violet (Ramm), introduces McKenna and her clique to a new version of the “Light as a Feather, Stiff as a Board” game, and the girls start dying off, the survivors must get to the bottom of the threat against them.

Unless they decide to publicize viewership statistics, it is difficult to predict whether Hulu will cancel or renew Light as a Feather for season two. Fortunately, we don’t have to wonder, since it has already been renewed for a second season. Still, I’ll keep an eye on press releases and the trades and update this page with breaking developments. Subscribe for free news alerts regarding the season two, including the release date, and other Light as a Feather cancellation or renewal news.

What do you think? Are you happy the Light as a Feather TV series was renewed for a second season? How would you feel, had Hulu cancelled this TV show, instead?