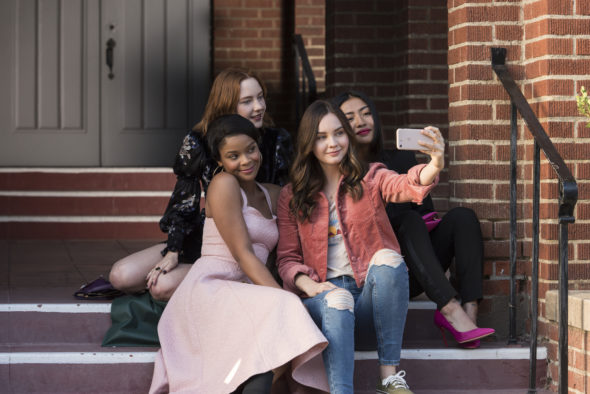 Do you find the first season of the Light as a Feather TV show on Hulu deathly chilling or dead boring? Usually, the Nielsen ratings play a big role in determining whether a TV show like Light as a Feather is cancelled or renewed for season two. Hulu and other streaming platforms, however, collect their own data. If you’ve been watching this TV series, we’d love to know how you feel about the Light as a Feather season one episodes. We invite you to rate them for us here.

A Hulu supernatural thriller, Light as a Feather stars Liana Liberato, Haley Ramm, Ajiona Alexus, Brianne Tju, Peyton List, Jordan Rodrigues, Dylan Sprayberry, Jordan Rodrigues, Brent Rivera, and Dorian Brown Pham. From creator R. Lee Fleming Jr. and based on the Zoe Aarsen book, the drama centers on centers on McKenna Brady (Liberato), a shy, popular high school senior, whose twin sister, Jennie (Liberato) is deceased. When a new student, Violet (Ramm), introduces McKenna and her clique to a new version of the “Light as a Feather, Stiff as a Board” game, and the girls start dying off, the survivors must get to the bottom of the threat against them.

What do you think? Which season one episodes of the Light as a Feather TV series do you rate as wonderful, terrible, or somewhere between? Are you happy Hulu renewed Light as a Feather  for a second season? Don’t forget to vote, and share your thoughts, below.