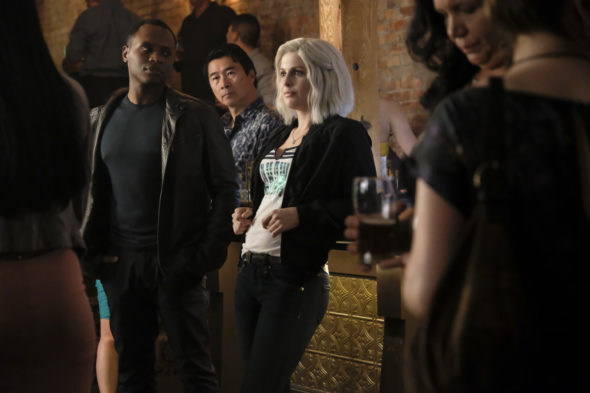 Is this series still undead or truly dead? Has the iZombie TV show been cancelled or renewed for a fifth season on The CW? The television vulture is watching all the latest cancellation and renewal news, so this page is the place to track the status of iZombie season five. Bookmark it, or subscribe for the latest updates. Remember, the television vulture is watching your shows. Are you?

A CW horror dramedy, iZombie stars Rose McIver as zombie/medical examiner Liv Moore. The “rom-com-zom-dram” also stars Malcolm Goodwin, Rahul Kohli, Robert Buckley, and David Anders. When Liv eats the brains of a deceased person, she temporarily inherits some traits from the person and gains insight into how he or she died. Pretending that she has psychic abilities, Liv then uses this knowledge to help the police solve crimes.

The fourth season of iZombie averaged a 0.25 rating in the 18-49 demographic and 754,000 viewers. Compared to season three, that’s down by 20% and down by 13%, respectively. Learn how iZombie stacks up against the other CW TV shows.

Will The CW will cancel or renew iZombie for season five? Seeing as shooting on season four wrapped about a month prior to its debut, that question seems key. The ratings have been down but I suspect this show will be renewed for a fifth (and possibly final) season.  I’ll keep an eye on the ratings and update this page with breaking developments. Subscribe for free iZombie cancellation and renewal alerts.

5/11/2018 Status Update: The CW has renewed iZombie for a fifth season. Details here.

What do you think? Are you glad that The CW renewed iZombie for a fifth season? Is season five the right time to end it? If it were up to you, would The CW cancel or renew iZombie for season six?

One hell on a season and a incredible SEASON finally. By far the best zombie show out really love how much deffent they have reimagined the zombies for the show. Cast is an incredible, Liv and Ravi have done alot in the show and yet this season is my fav out of the 4seasons ,
Blaine and Donnie really are the most likable bad guys ever

A great example of a “guilty pleasure” show! Love the characters. Blaine is hysterical. He & the Donnie character steal the show so…one more season for the road.

Izombie is the best.. please get picked up for season 5.. absolutely love this show..

Please pick up iZonbie. What a take the show has on zombies, people, and life in general. I get a lot of laughs from watching this dark humor show. Somehow it makes me feel good! The cast is fantastic! I wish it would. Intinur beyond Season 5. Please think about it. TY Karyn

Please please keep iZombie for a fifth season!!! I love this show and the cast!!!

I don’t want IZombie to go off the air. It’s such a good show