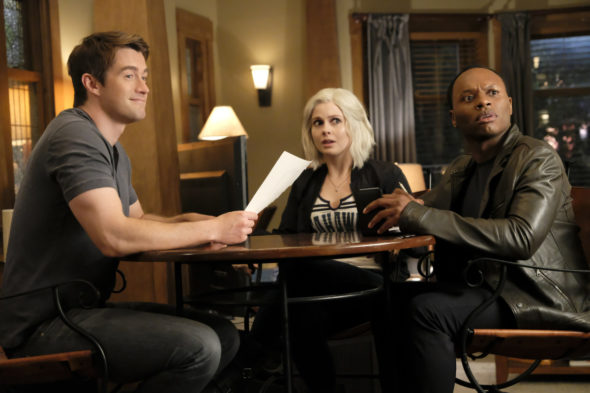 Does the fourth season of the iZombie TV show on The CW leave you wanting more Liv Moore? As we all know, the Nielsen ratings typically play a big role in determining whether a TV show like iZombie is cancelled or renewed for season five. Unfortunately, most of us do not live in Nielsen households. Because many viewers feel frustration when their viewing habits and opinions aren’t considered, we’d like to offer you the chance to rate all of the iZombie season four episodes here.

A CW horror dramedy, iZombie stars Rose McIver as zombie/medical examiner Liv Moore. The “rom-com-zom-dram” also stars Malcolm Goodwin, Rahul Kohli, Robert Buckley, and David Anders. When Liv eats the brains of a deceased person, she temporarily inherits some traits from the person and gains insight into how he or she died. Pretending that she has psychic abilities, Liv then uses this knowledge to help the police solve crimes. **Status update below.

What do you think? Which season four episodes of the iZombie TV series do you rate as wonderful, terrible, or somewhere between? Is it ending at the right time? Should The CW cancel or renew iZombie for season six? Don’t forget to vote, and share your thoughts, below.

Best season yet! Love all yet this season makes hilarious wit seem effortless, characters increasingly lovable (still hating how easy it is to love Blaine plus increasing plot twist & depth in characters, like Chase Graves, working in a delightfully conflicted way!) just cannot get enough! This show is one of a kind! Keep it coming!

iZombie is one of my favorite shows. It’s silly and just fun to watch. Rose McIver can do anything. She’s so talented. She plays the role so well.

Please don’t cancel iZombie. We are losing enough great shows without losing this one too!

I have to agree with Dale below. Rose can channel so many different personalities. Her hockey goon was great. I also found it funny as hell to watch Rob Thomas get his brains eaten at the end of Season two. Glad the boss has a sense of humor.

I love this show because it is so camp. It should be kept for at least another season. The writers add just the right mix of serious and comedic elements that give the show its unique character. The story lines are fresh and imaginative.

Rose McIver is the show! She takes on all those personalities of the “brains she eats” & does it so well! Never thought I’d watch a zombie show..nevermind laugh my butt off while viewing!