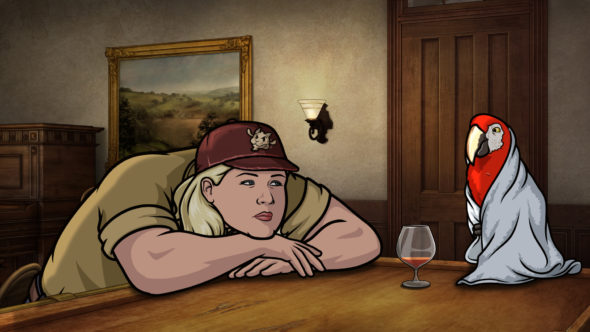 What does the future hold in store for Sterling Archer? Has the Archer TV show been cancelled or renewed for a 10th season on FXX? The television vulture is watching all the latest cancellation and renewal news, so this page is the place to track the status of Archer season 10. Bookmark it, or subscribe for the latest updates. Remember, the television vulture is watching your shows. Are you?

Since Archer has already been renewed through its tenth season, and creator Adam Reed has said that will be the end of its run, there’s little reason to wonder whether it will be cancelled or renewed. Since even renewals can be cancelled, I’ll update this page with breaking developments. Subscribe for free Archer cancellation or renewal alerts.

What do you think? Do you hope the Archer TV show will be renewed for a 10th season? How would you feel if FXX cancelled this TV series, instead?

I think that Archer should come back. To find out about Lana and his daughter. Plus it’s still super fun to watch .

If I archer is canceled I will cancel the producers‍♂️

This show is one of the better ones on TV at the moment… I don’t want it to end up like Family Guy or The Simpsons where they just keep it going for money and the show sucks, but then again I love this show and don’t want to see it go.

If season 10 gets cancelled I’ll never watch another FX or FXX show again. 🙂