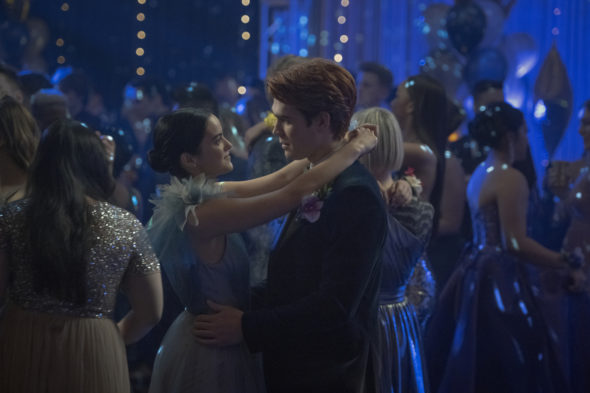 Will there be any less drama when the teens become adults in the fifth season of the Riverdale TV show on The CW? As we all know, the Nielsen ratings typically play a big role in determining whether a TV show like Riverdale is cancelled or renewed for season six. Unfortunately, most of us do not live in Nielsen households. Because many viewers feel frustration when their viewing habits and opinions aren’t considered, we invite you to rate all of the fifth season episodes of Riverdale here. *Status Update Below.

A CW teen mystery drama, Riverdale stars KJ Apa, Lili Reinhart, Camila Mendes, Cole Sprouse, Madelaine Petsch, Madchen Amick, Casey Cott, Mark Consuelos, Charles Melton, Vanessa Morgan, Erinn Westbrook, and Drew Ray Tanner. Based on the characters from the Archie Comics, this show focuses on the seemingly quiet town of Riverdale and some of its teen residents, including Archie (Apa), Betty (Reinhart), Veronica (Mendes), and Jughead (Sprouse). They discover the darkness and dangers that bubble underneath their town’s wholesome façade. In season five, the gang bids farewell to high school and, in some cases, to each other as many of the characters go their separate ways. Then, the story moves forward in time. The former teen classmates are now young adults who return to Riverdale to escape their troubled pasts.

What do you think? Which season five episodes of the Riverdale TV series do you rate as wonderful, terrible, or somewhere between? Do you think that Riverdale should be cancelled or renewed for a sixth season on The CW? Don’t forget to vote, and share your thoughts, below.

*2/3/21 update: Riverdale has been renewed for a sixth season on The CW.