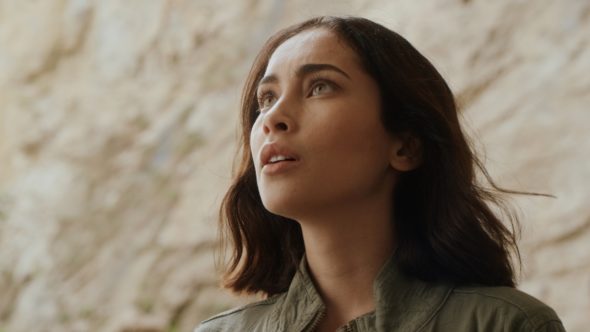 Is the future dark or bright for Jax? Has the Pandora TV show been cancelled or renewed for a second season on The CW? The television vulture is watching all the latest cancellation and renewal news, so this page is the place to track the status of Pandora, season two. Bookmark it, or subscribe for the latest updates. Remember, the television vulture is watching your shows. Are you?

A CW sci-fi drama from creators Mark A. Altman and Steve Kriozere, Pandora stars Priscilla Quintana, Oliver Dench, Raechelle Banno, John Harlan, Ben Radcliffe, Banita Sandhu, Martin Bobb-Semple, and Noah Huntley. Unfolding in the year 2199, the action centers on Jax (Quintana) aka Pandora. After the traumatic death of her parents, Jax must start her life anew, so she enters the EarthCom Fleet Training Academy. It is there that she discovers there is more to her identity than she had always believed. When the truth shakes up her world, it leads her on a quest for answers. Whether Jax will save or destroy humanity though, remains to be seen.

The first season of Pandora averaged a 0.12 rating in the 18-49 demographic and 544,000 viewers. Learn how Pandora stacks up against the other CW TV shows.

Will The CW cancel or renew Pandora for season two? It seems like the show is relatively cheap to produce so that’s a good sign but my gut still tells me that it will likely be cancelled. I’ll update this page with breaking developments. Subscribe for free Pandora cancellation or renewal alerts.

What do you think? Are you glad that the Pandora TV show has been renewed for a second season? How would you feel if The CW had cancelled this TV series, instead?

Good storytelling. I am able to forgive many of the past & current idioms used in the show because the story is good and I have been drawn into the characters, much like Star Trek and Star Wars. I enjoy fantasy and Sci-fi. At a time like our current times – pandemic, Politics, and economy – I need something to take me away from the depressing, confusing, and dismaying of all thtat is going on around me.

I hate getting pulled into a good story, only to have it canceled. Please don’t do it.