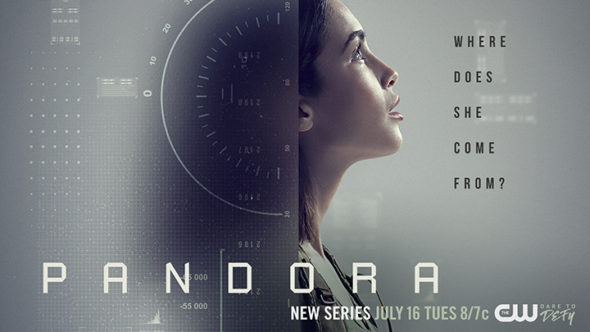 Much of the summertime programming on The CW is of the non-scripted variety, but even during the lesser-watched, warmer months, the littlest network still likes to keep a little drama in the air. The newest entry in this category is the Pandora TV series. How will it do in the Nielsen ratings? Is science fiction the right genre to bring people inside and get them to sit down in front of their televisions? Will Pandora be cancelled or renewed for season two? Stay tuned. *Status update below.

A CW sci-fi drama from creators Mark A. Altman and Steve Kriozere, Pandora stars Priscilla Quintana, Oliver Dench, Raechelle Banno, John Harlan, Ben Radcliffe, Banita Sandhu, Martin Bobb-Semple, and Noah Huntley. Unfolding in the year 2199, the action centers on Jax (Quintana) aka Pandora. After the traumatic death of her parents, Jax must start her life anew, so she enters the EarthCom Fleet Training Academy. It is there that she discovers there is more to her identity than she had always believed. When the truth shakes up her world, it leads her on a quest for answers. Whether Jax will save or destroy humanity though, remains to be seen.

What do you think? Do you like the Pandora TV series on The CW? Should it be cancelled or renewed for a second season?

Show started a bit slow but it quickly started picking up the pace i thought, quite fast we started to learning more about who the lead is supposed to be and her role. Not to mention that awesome space battle in the previous episode before the last was one of the best i have seen in any sci-fi show in recent years, the scale was truly massive and would love to see more of that if the show gets renewed, which it should in my opinion as it has much potential. Besides, even Star Trek TNG wasnt the best in… Read more »

I want a season 2 love that show

Last nigh t2 episodes were great the series has potential

I love Xander and Jacks the main characters, please have better writers. The series has potentials. I love how they dismiss JAX and Reylen, like him with matta. please don’t bring back Greg he serves no purpose. Give other season and correct mistakes. When the audience like a show they all cancelled, so surprise us with next season and grow ratings. People afraid to like the show nowadays. , it all always get cancelled

OMG…OMG…OMG….I just watched episode 12 and 13 together. In all my years I have never watched such an over the top… horribly cliche’ filled and totally predictable mistake in science fiction. Those actors now have to live with this on their resume. Please do hunanity a favor CW…kill this abomination. Even I can deliver you a credible sci-fi series that science fiction fans will support and not a mockery such as this has been. What you have never learned about sci-fi fans CW is that they want inteligent story lines with plausible scenarios, and abhore lame dialogue filled with cliche’s.… Read more »

And yet, it’ll most likely still be renewed, plus, actors CHOOSE what shows they want to be on, and ‘do humanity a favor’? LOOOLLLLL!! a REAL favor to humanity would be kill off all those fake ‘reality’ shows!

Only A-list actors can choose which shows they want to be on and get to read the scripts beforehand. These aren’t A-list actors. They audition and hope to get a spot on the show…without knowing how bad it’s going to be. And this one is bad.

The ratings show just how bad it is in the opinion of real sci-fi fans. Although those who fawn over soap opera romance triangles might love it.

But that’s not gonna keep sci-fi fans watching and less than 400,000 viewers is pretty bad.

I dont think its a great show. But i do like it. Its science fiction and its on free tv during the summer. It has nice special effects. Its a good combination of star wars and star trek. So, also a nice way to enjoy the summer with a science fiction show. I hope it gets a second season

I loved this cw series! This is exactly what I wanted from the cw! This sci fi is amazing! I’m a millennial and it was perfect! One of my favorite shows like the 100. Please don’t kill it ! Either sell it to Netflix for 2nd season or renew it CW. Us millennials don’t have cable and are watching online on your site where ur making ad revenue!

This show needs to be cancelled. The actors are doing their best with a horrible script. The writing is terrible, the cliches are too numerous and the main character acts like the Universe revolves around her….basically totally spoiled with no discipline.

The directing is terrible with unrealistic scenarios and non-credible behaviour from the Characters.

How does CW continue to fund writers like this to produce such bad drama? Don’t they have any staff who have a better handle on what sci-fi fans will support?

I hope it stays on air and is renewed! I really like it, watched both episodes last night. It has so much potential and I think there’s some excellent chemistry between Jax and Ralen. Everyone complaining has to keep in mind some of the best and long running shows had a rocket episode or two getting its tv swimming legs. Star Trek the Next Generation’s first episode was very slow and almost hard to sit through in some parts without getting sleepy (I’m talking about the trial with Q and I love Q!). Give Pandora a few more episodes for… Read more »

Nope…no amount of second chances are going to make this look or feel better and save this from cancellation. And after seven episodes the ratings are still generous at just over 500k viewers. That’s not enough to stay on the air.

Sadly another total disaster for sci-fi because the writers didn’t know what the fans want to see.

M. Byron, I too am a sci-fi fan, and you do not speak for me. While this show had a difficult start, it significantly improved as it developed. It’s no 2001, but it has some likable characters and a reasonably entertaining story. The ratings may foretell cancellation, but I would like for Pandora to have another season.

It’s pretty obvious I speak for the Majority of sci-fi fans, as indicated in the drop in ratings. Losing more than half their audience already demonstrates how well it appeals to fans of science fiction.

You do know this runs on a network that dosn’t care what the live ratings are, RIGHT?? so, odds are, this’ll be renewed.

Got news for you…every show that gets it’s funding from advertisers cares what the ratings are! When advertisers realize that hardly anyone is watching the series…they will put their money elsewhere. Science fiction has bombed tragically in the past so badly that advertisers literally stop all adds for a series and the last few episodes have had to replay the last 15 minutes of the show because no ine wanted to put an add in it….Defying Gravity is one example. No advertisung means no revenue amd no network is in business to pay actors and receive nothing in return. They… Read more »

Jax and Xander have chemistry she did not do much acting with Ralen what are you watching.

Stick a fork in this turkey!

Readding the pitch I thought : Oh a ne Scifi show, let’s try it.
I tried to watch the first episode …
I could not stand more than 10 minutes.
So badly written that it is badly played.
Let’s hope it won’t last more than a summer.

The Ultimate Fangirl
Reply to  TiPi

Too bad for you, odds are, this’ll get renewed.

No network will continue to pay a couple million per episode if the advertisers pull out. And advertisers watch the ratings…if no one is watching..they can advertise on a more popular show and get more exposure for their product…

At less than 400,000 in the last episode..odds aren’t good. If they already had a contract for two seasons maybe…but nobody makea these shows as a charity for viewers..it has to pay the bills or they move on.