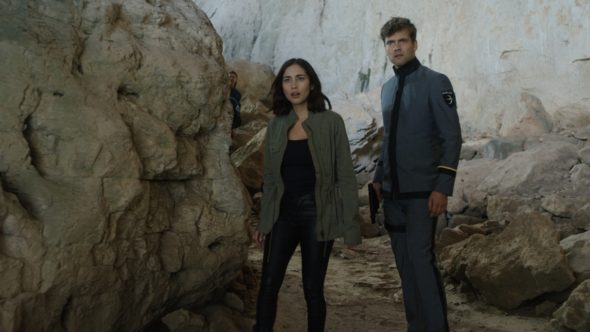 TV show description:
From creators Mark A. Altman and Steve Kriozere, the Pandora TV show is a science-fiction drama that unfolds in the year 2199. The action centers on Jax (Quintana) aka Pandora, who must start her life anew.

After her parents’ traumatic deaths, this enterprising young woman enters the EarthCom Fleet Training Academy and proceeds to form something of a “found family.” There’s more to Jax than meets the eye — even more than she suspects.

In addition to being the Academy’s most intimidating teacher, Professor Osborn is also Jax’s uncle. As cavalier as he is challenging, Osborn sometimes seems like an unstoppable force. Like Xander, his position at the Academy is a cover for his real job with Earth Intelligence Services. Because of this, Xander feels torn between his love for Jax and his duty to her uncle.

Jax’s roommate, Delaney Pilar (Sandhu), is a nanite-enhanced woman. Her cybernetic implants keep her connected to the “Datastream,” so she is able to process information more quickly than ordinary people. She’s also connected to the Datacore’s group mind. Sometimes, she second-guesses her childhood decision to sacrifice her individuality to the “hive mind.”

A clone and the former property of the Adari sect, Atria Nine (Banno) is a talkative, enthusiastic young woman. Her neck tattoo informs the world of her past status. Although she is now free from the theocracy, her liberation came at a price. She does her best to be positive and to hide her doubts — particularly the doubts about herself.

A one-time adversary of the Earth Confederacy, Ralen (Radcliffe) is the son of the Zatarian ambassador. As a humanoid alien and the first of his species at the Academy, he must deal with the prejudices of those who blame the Zatarians for the war between Earth and Zatar.

Thomas James Ross (Bobb-Semple) is the son of a genetically engineered telepath. He wants nothing to do with the man though and is in hot pursuit of a career as a fighter pilot until he discovers his own abilities and purpose.

When Jax discovers there is more to her identity than she had always believed, the truth shakes up her world and leads her on a quest for answers. Whether she will save humanity or destroy it remains to be seen.

Series Finale:
Episode #TBD
The series has not ended yet.
First aired: TBD.


What do you think? Do you like the Pandora TV series? Should this CW TV show be cancelled or renewed for another season?

I just read on another site that another channel/streamer bought the rights & will renew season 3; CW sold the rights.