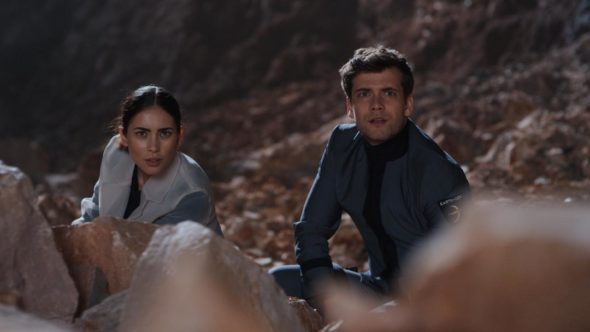 Is Jax on the right path during the first season of the Pandora TV show on The CW? As we all know, the Nielsen ratings typically play a big role in determining whether a TV show like Pandora is cancelled or renewed for season two. Unfortunately, most of us do not live in Nielsen households. Because many viewers feel frustration when their viewing habits and opinions aren’t considered, we’d like to offer you the chance to rate all of the Pandora season one episodes here. *Status update below.

A CW sci-fi drama from creators, Pandora stars Priscilla Quintana, Oliver Dench, Raechelle Banno, John Harlan, Ben Radcliffe, Banita Sandhu, Martin Bobb-Semple, and Noah Huntley. Unfolding in the year 2199, the action centers on Jax (Quintana) aka Pandora. After the traumatic death of her parents, Jax must start her life anew, so she enters the EarthCom Fleet Training Academy. It is there that she discovers there is more to her identity than she had always believed. When the truth shakes up her world, it leads her on a quest for answers. Whether Jax will save or destroy humanity though, remains to be seen.

What do you think? Which season one episodes of the Pandora TV series do you rate as wonderful, terrible, or somewhere between? Should The CW cancel or renew Pandora for a second season? Don’t forget to vote, and share your thoughts, below.

We have enjoyed Pandora very much and would love to see it continue.