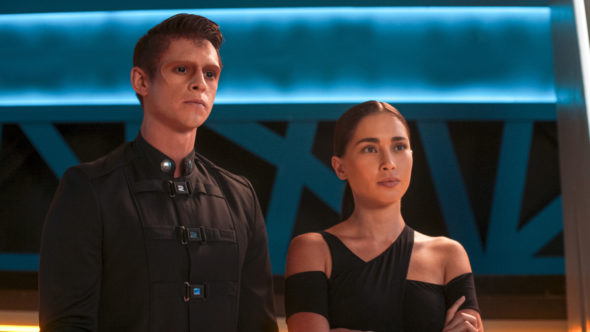 Can Jax save the universe in the second season of the Pandora TV show on The CW? As we all know, the Nielsen ratings typically play a big role in determining whether a TV show like Pandora is cancelled or renewed for season three. Unfortunately, most of us do not live in Nielsen households. Because many viewers feel frustration when their viewing habits and opinions aren’t considered, we invite you to rate all of the second season episodes of Pandora here. *Status update below.

A sci-fi drama series on The CW, Pandora stars Priscilla Quintana, Oliver Dench, Ben Radcliffe, Noah Huntley, Akshay Kumar, Nicole Mavromatis, Tina Casciani, and Vikash Bhai. Unfolding in the year 2199, the action centers on Jax (Quintana) aka Pandora. After the traumatic death of her parents, Jax must start her life anew, so she enters the EarthCom Fleet Training Academy. It is there that she discovers there is more to her identity than she had always believed. She and her friends learn to defend the Galaxy from threats, both alien and human. With time running out before the universe is annihilated by an enigmatic alien race, only a misfit band of heroes – Jax and her friends, Captain Xander Duvall (Dench) and alien Ralen (Radcliffe) — can save everyone from destruction.

What do you think? Which season two episodes of the Pandora TV series do you rate as wonderful, terrible, or somewhere between? Do you think that Pandora should be cancelled or renewed for a third season on The CW? Don’t forget to vote, and share your thoughts, below.

Pandora must have a season three. The ending of season two was a real cliffhanger. Brilliant, fun series.

I love Pandora. It’s Mysterious, Humorous and Intriguing with great actors. I find the interactions between the characters fascinating.

Good show. I hope it’s given a chance to tell the story.

Pandora was very interesting and the cast is excellent. I would really like them to at least have one more season!

I hope and pray that Pandora will return for the 3 seasons.