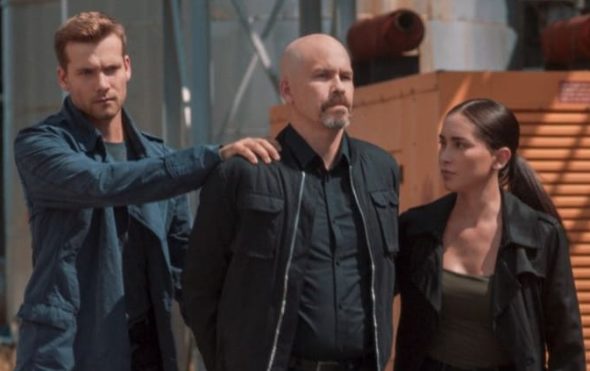 In the spring, a couple of outlets reported that the Pandora TV show had been cancelled. The CW has remained publicly mum on the show’s future but it’s telling that the sci-fi series has been removed from the network’s press site. Fortunately for fans of the show, that doesn’t mean that the show won’t be back for a third season.

A sci-fi action series, Pandora stars Priscilla Quintana, Oliver Dench, Ben Radcliffe, Noah Huntley, Akshay Kumar, Nicole Mavromatis, Tina Casciani, and Vikash Bhai. Unfolding in the year 2199, the action centers on Jax (Quintana) aka Pandora. After the traumatic death of her parents, Jax must start her life anew, so she enters the EarthCom Fleet Training Academy. It is there that she discovers there is more to her identity than she had always believed. She and her friends learn to defend the Galaxy from threats, both alien and human. With time running out before the universe is annihilated by an enigmatic alien race, only a misfit band of heroes – Jax and her friends, Captain Xander Duvall (Dench) and alien Ralen (Radcliffe) — can save everyone from destruction.

Airing on Sunday nights, the second season of Pandora averaged a 0.06 rating in the 18-49 demographic and 298,000 viewers. Compared to season one, that’s down by 47% in the demo and down by 45% in viewership. It’s worth noting that The CW caters to a younger demo and puts less weight on traditional ratings than the other networks do.

While it looks very clear that Pandora won’t be returning to The CW, a source close to the production tells me that work is underway on the third season, and filming is expected to begin in early 2022. The show will have a new US broadcaster and the episodes are likely to begin airing next summer. When the pickup is officially announced, there’s a possibility that Pandora could also be renewed for more than season three.

What do you think? Have you enjoyed the Pandora TV series? Do you plan to watch the third season when it eventually becomes available?

Yes if its gonna be available on something i can watch

I enjoyed both season 1 and 2 and hope for more. I would definitely watch it!

The was excellently, I am not sure what a season 3 could offer. It would require special skilled story line and a way for pandora to return (Jax)

Some of us like a conclusion rather than a cliffhanger.

yes will definitely watch the third season i will be looking forward to it!

Watching it now. Will watch season 3. Enjoying it now.

There was something I really enjoyed regarding this show that was not in other sci-fi fare I enjoy.

I was really disappointed to learn that it was cancelled but was not surprised.

I am now delighted that it has been picked up and trust the same team behind the scenes get to keep telling the stories.

Too bad the CW has its head up its ass — their loss but our gain — thanks to whomever picked Pandora up and decided to run with it!!!

I also just found this series on Prime. I had never heard of it. I definitely would have watched it if I had known. I am enjoying it immensely and hope there will be a S3!

I became a fan of Pandora during the middle of season 1 and really like the show and looked forward to watching upcoming episodes, I would prefer that Pandora continue, hopefully not with Netflix like other good shows, cable TV has become bery expensive and to spend more money on extras like Netflix has become a bit overwhelming, so hopefully Pandora will continue in a way EVERYONE can continue to enjoy.

Just found this, I like it a lot, glad to see season 3.