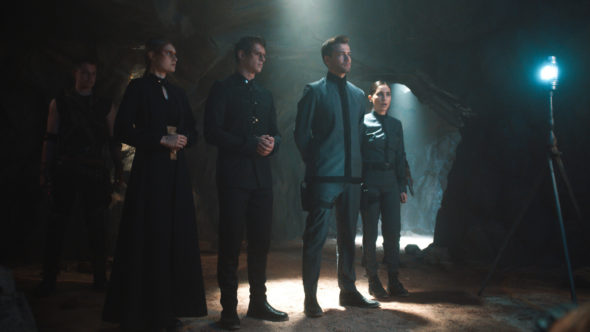 Can Jax and her friends handle what’s to come?  Has the Pandora TV show been cancelled or renewed for a third season on The CW? The television vulture is watching all the latest cancellation and renewal news, so this page is the place to track the status of Pandora, season three. Bookmark it, or subscribe for the latest updates. Remember, the television vulture is watching your shows. Are you?

Airing on The CW television network, Pandora stars Priscilla Quintana, Oliver Dench, Ben Radcliffe, Noah Huntley, Akshay Kumar, Nicole Mavromatis, Tina Casciani, and Vikash Bhai. Unfolding in the year 2199, the action centers on Jax (Quintana) aka Pandora. After the traumatic death of her parents, Jax must start her life anew, so she enters the EarthCom Fleet Training Academy. It is there that she discovers there is more to her identity than she had always believed. She and her friends learn to defend the Galaxy from threats, both alien and human. With time running out before the universe is annihilated by an enigmatic alien race, only a misfit band of heroes – Jax and her friends, Captain Xander Duvall (Dench) and alien Ralen (Radcliffe) — can save everyone from destruction.

The second season of Pandora averaged a 0.05 rating in the 18-49 demographic and 298,000 viewers. Compared to season one, that’s down by 58% in the demo and down by 45% in viewership. Find out how Pandora stacks up against other The CW TV shows.

Will The CW cancel or renew Pandora for season three? The ratings are okay (for a CW show) and it fits in well with the channel’s other programming. The series is also shot in Bulgaria so it’s likely less expensive to film than other sci-fi dramas. For now, I suspect that Pandora will be renewed. I’ll update this page with breaking developments. Subscribe for free alerts on Pandora cancellation or renewal news.

What do you think? Do you hope the Pandora TV show will be renewed for a third season? How would you feel if The CW cancelled this TV series, instead?

Just finished Pandora and I absolutely loved 1 & 2, however I feel that there isn’t much more that can be done to add to another story if they have a series 3. Leave us with the comfort that Jax has saved Earth.
If you can maybe bring her back to save us all from Covid 19 then Yes Series 3 bring it on.

OMG I need a season 3!! It’s totally set up to follow great plot threads into the future. BTW…the overall quality upgrade from season 1 to 2….huge!! Great action..love the David Lynch lite depiction of the ancient ones. Back to my original point….OMG I need a season 3!

Would Love To See Another Season. Of Pandora On The CW.

this is the best series in a long time love it

I hope that the CW will renewal Pandora for the new season.