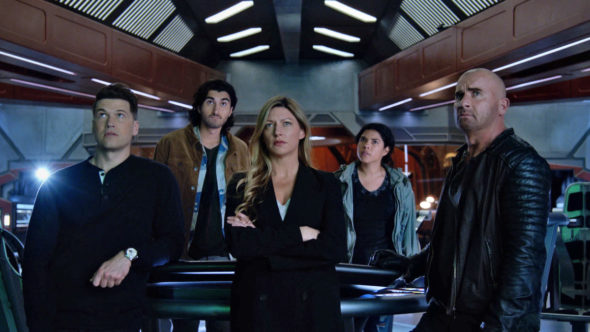 Where will the Waverider crew end up next? Has the DC’s Legends of Tomorrow TV show been cancelled or renewed for a seventh season on The CW? The television vulture is watching all the latest cancellation and renewal news, so this page is the place to track the status of DC’s Legends of Tomorrow, season seven. Bookmark it, or subscribe for the latest updates. Remember, the television vulture is watching your shows. Are you?

Airing on The CW television network, DC’s Legends of Tomorrow stars Caity Lotz, Dominic Purcell, Nick Zano, Tala Ashe, Jes Macallan, Matt Ryan, Adam Tsekhman, Olivia Swann, Shayan Sobhian, and Lisseth Chavez. The series follows a motley group of heroes and villains as they have misadventures across time and space in their stolen Waverider time-ship. The crew has dealt with monsters, time anomalies, and villains from Hell, but, in season six, they’ll face something even more challenging and bizarre in the timeline. After one of their own is abducted by a ruthless alien, this new mission becomes personal.

What do you think? Are you glad that the DC’s Legends of Tomorrow TV show has been renewed for a seventh season? How would you feel if The CW had cancelled this TV series, instead?