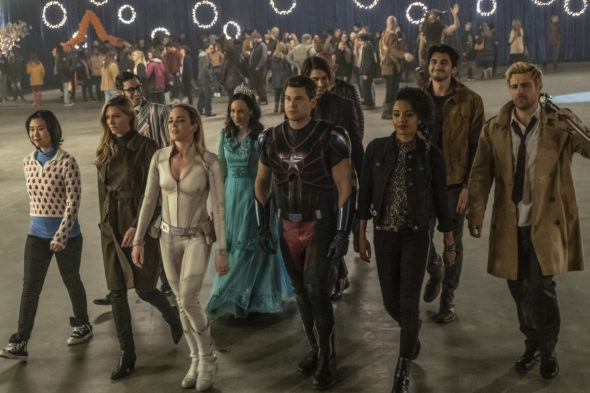 You can count on this team to stick around. The CW has given DC’s Legends of Tomorrow an early sixth season renewal which will take the series through the 2020-21 season. The fifth season is set to kick off on Tuesday, January 14, 2020 with the fifth installment of the Crisis on Infinite Earths crossover event.

The show has been a middle-of-the-road performer in the ratings for The CW. In its fourth season, out of 15 programs, Legends ranked eighth in the 18-49 demographic and ninth in viewers. It averaged a 0.29 in the demo and 948,000 viewers.

What do you think? Do you enjoy the DC’s Legends of Tomorrow TV series? Do you plan on watching season five when it returns this month?

i wonder who’s the take over for Ray i think i would like for Ryan character to return and have him join the team all though there number of the team is growing because i think 9 or 10 legends are way to mean people because i think six or 7 people is enough people and since Ray Nora left that leaves room one more person and that is Ryan Choi character and that still leaves 7 people together..

I love this show. It’s fun to watch. I want character Ray and Nora to come back. It won’t be the same without them, especially Ray. I will keep watching though.

I won’t like this show any more They Kick Brandon Routh that played Ray Palmer and Courtney Ford that played Nora off the show.Brandon Routh said that was not his idea he wanted to stay and was one of the orignial memebers of this show.CW was wrong and I will not watch a show that does that and gives no reason.He was very good and made the show kinda humorous and enjoyed to watch.I’m Threw with CW.

They didn’t “kick” them off. And for your information he actually said he wanted to leave to pursue other projects. What is the point of a DC show that is meant to showcase oddball DC ips if it sticks with one like The Atom? Added to that is natural evolution. You don’t make characters do things in a story for a whim, you do things that are natural. The story developed and with Brandon leaving it meant no Nora. But I guess you are right. I mean 100 and Lost never changed much and they are FAR better than say… Read more »

I won’t like this show any more They Kick Brandon Routh that played Ray Palmer and Courtney Ford that played Nora off the show.Brandon Routh said that was not his idea he wanted to stay and was one of the orignial memebers of this show.CW was wrong and I will not watch a show that does that and gives no reason.He was very good and made the show kinda humorous and enjoyed to watch.I’m Threw with CW.

I know what you mean. Love the fact this season they have focused on Charlie and John. The whole punk vibe. It is a lot better now it doesn’t take itself so seriously and doesn’t have the cheesy acting. At first it felt like a bad rip off. Now it’s found it’s own feet and is niche. Some wont like it… But then again in the UK one of the most watched shows is one called “Love Island” … Cannot wait for the finale and to see what happens with the Loom. Also… Not sure what Linda’s problem is. But… Read more »

as they are often called in the show, the Legends are idiots…lovable idiots, fun writing that bends the rules, just like they should … stoked they are doing season6 … adventure with laughs…

I will watch as many seasons as are made of this show with my three boys. We’ve watched Arrow, Flash and now Legends.

i’ll watch for sure, nice show

i hope there well be a sixth season because i want to see more of Zaria brother and the whole team of the legends..

And I should expect there is a strong chance of a 7th unless something big. With the pandemic it has meant new shows aren’t being pitched or pilots put into production. So this means they wont want a void. Especially with Arrow ending and now Batwoman having to recast.

Yes love all these shows and their crossover episodes. Definitely will be watching