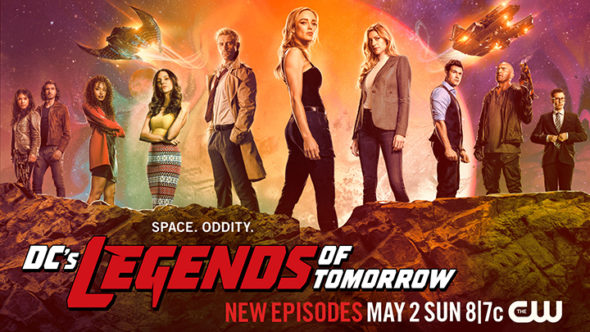 We don’t have to wonder if DC’s Legends of Tomorrow will be cancelled this year. Another cast member may be leaving but the show has already been renewed for season seven. Will this series return for many more years? Stay tuned.

A superhero comedy-drama series, DC’s Legends of Tomorrow stars Caity Lotz, Dominic Purcell, Nick Zano, Tala Ashe, Jes Macallan, Matt Ryan, Adam Tsekhman, Olivia Swann, Shayan Sobhian, and Lisseth Chavez. The series follows a motley group of heroes and villains as they have misadventures across time and space in their stolen Waverider time-ship. The crew has dealt with monsters, time anomalies, and villains from Hell, but, in season six, they’ll face something even more challenging and bizarre in the timeline. After one of their own is abducted by a ruthless alien, this new mission becomes personal.

9/6 update: You can see the latest night’s ratings in context.

For comparisons: Season five of DC’s Legends of Tomorrow on The CW averaged a 0.22 rating in the 18-49 demographic and 764,000 viewers. It’s worth noting that season five’s premiere was part of the “Crisis” multi-show crossover event and attracted much higher than usual ratings.

What do you think? Do you like the DC’s Legends of Tomorrow TV series on The CW? Are you glad that it’s already been renewed for a seventh season?

This show is soo amazing. The writers found a way to make a show that is fun to watch and still have your think about life. A place where different lost people find a way to become a family saving the world. It’s so innovating on how they tell these stories. There is not many shows out there that are as unique as this one. Many shows follow these formulas to make these TV shows that are all the same; this one does not. It is nice to see a show that takes risks and pays off. It’s Legends and… Read more »

“nice to see a show that takes risks and pays off” but did you see the ratings? or where is the payoff?

I thought it was canceled 2 years ago, when writers went bananas on the script. how is it still running with those numbers?