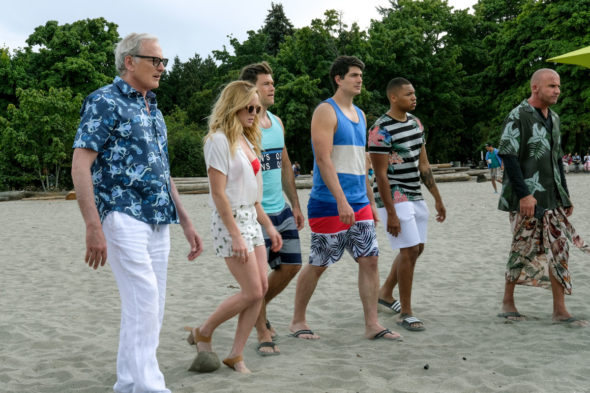 A CW superhero action-adventure drama, DC’s Legends of Tomorrow stars Victor Garber, Brandon Routh, Caity Lotz, Franz Drameh, Arthur Darvill, Amy Pemberton, Dominic Purcell, Wentworth Miller, Maisie Richardson-Sellers, Nick Zano, Tala Ashe, and Neal McDonough. Thanks to fracturing the timeline, in season three, the Legends must restore all the anachronisms to their rightful timelines, before the time stream falls apart. However, Rip Hunter (Darvill) and the Time Bureau prompt them to disband, until Sara (Lotz) gets the band back together.

This show better not be canceled either!!!! I’ve been waiting for months for the new season….

I would love a season 4! This show is great and helped me to come out as a bisexual female to family so I would be very very happy if they renewed this for a 4th season.

Endless possibilities for stories, good cast, could bring back the two killed off!

I agree that DC legends of Tomorrow should return for season 4.

I agree for the fourth season to bring the firefighters back that work tbe fire or is they fire stater well bring them back and alot of people look at that shiw and we dont have neilson rating the best shows waa when D.C. brought all his character s together to beat the nazis wanta bes good plot.good showL

RENEW DC’S LEGENDS OF TOMMOROW. IT’S A GREAT PROGRAM AND DESERVES TO BE KEPT ON THE AIR.

Yes they must have a season 4 because the show is super amazing!!!

RYAN, YOU’VE GOT MY VOTE.