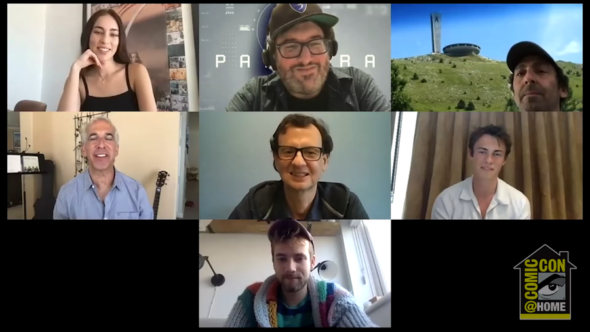 What’s next for Pandora? Members of the cast and creative team of The CW TV show recently discussed what fans can expect from the series’ second season.

The sci-fi drama takes place in the year 2199 and centers on Jax (Priscilla Quintana) aka Pandora, a young woman who enters the EarthCom Fleet Training Academy after her parents’ traumatic death. There, she discovers there is more to her identity than she had always believed. The cast also includes Oliver Dench, Raechelle Banno, John Harlan, Ben Radcliffe, Banita Sandhu, Martin Bobb-Semple, and Noah Huntley.

During a recent virtual panel for this year’s Comic-Con@Home, the cast and creators of Pandora revealed season two will begin filming this summer in Bulgaria. The new season is set to premiere this fall on The CW. Watch the interview and new teaser below:

What do you think? Have you seen the Pandora TV series? Will you watch season two on The CW?

I Liked the show. I’ve been waiting to hear about it. Thanks