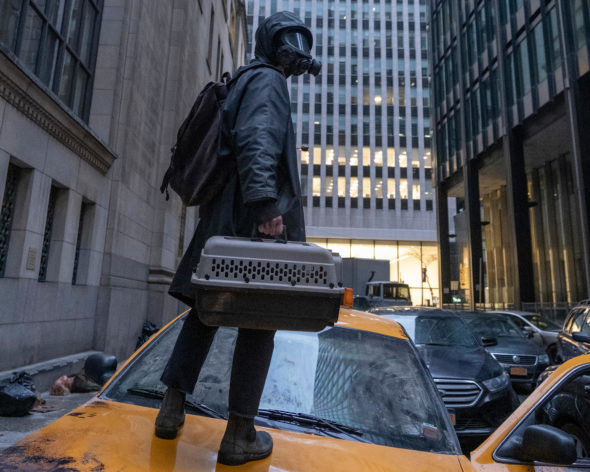 TV show description:
A post-apocalyptic drama series, the Y: The Last Man TV show is based on the DC Comics series of the same name by Brian K. Vaughan and Pia Guerra.

After a mysterious Event wipes out every living creature with a Y chromosome, throwing the world into chaos, Congresswoman Jennifer Brown (Lane) rises through a decimated line of succession to become President of the United States. Jennifer assembles a dedicated team of women to rebuild, but her plans are upended when she learns that her cisgender son Yorick (Schnetzer) and his male pet monkey survived the Event.

Facing massive unrest fueled by widespread conspiracy theories, Jennifer teams up with covert operative Agent 355 (Romans) to keep Yorick’s survival a secret and transport him to Dr. Allison Mann (Bang), a top geneticist who may be able to discover how he survived.

However, Yorick has other ideas. An old-school romantic, he is desperate to find his missing girlfriend, Beth (Canfield). As Yorick and 355 hit the road in secret, Jennifer’s political rivals circle, led by Kimberly Campbell Cunningham (Tamblyn). Kimberly senses that Jennifer is hiding something and tries to uncover the truth in order to bring her down.

Meanwhile, Jennifer’s daughter Hero (Thirlby), an EMT harboring deep shame and a dark secret, works with her best friend Sam (Fletcher) to find safety in this post-apocalyptic landscape. They join with Nora Brady (Ireland), a political advisor struggling to keep her young daughter alive. Together, they encounter a well-organized and ideologically driven group of survivors led by Roxanne (Pyle), a former homicide detective who has become a cult-like figure. As this group becomes more violent and dangerous under Roxanne’s leadership, Hero and Sam’s friendship is tested while Nora begins to see a different path for herself and her daughter.

Eventually, these worlds collide as old alliances crumble and new ones form. The survivors grapple with the identities they clung to before the Event, struggling to reconstruct a sense of self in this new world. As they start to cast aside old rules, norms, and traditions, they slowly begin to realize that the old world is gone and never coming back.

Series Finale:
Episode #10 — Victoria
As the Amazons close in on Marrisville, Nora reaches a breaking point. Yorick makes a new connection while 355 faces her past.
First aired: November 1, 2021.

What do you think? Do you like the Y: The Last Man TV show? Do you think it should have been cancelled or renewed for a second season?

This show needs to be renewed!

This show needs to be renewed!